AS500 from DeepCool had our praise when we got to test it. Its noise to performance ratio is quite good. This time we are taking a look at their AS500 Plus Review – White CPU air cooler. This cooler has the same heatsink as is in the original AS500 but it has two changes. These are the use of two TF140S White edition fans and the white color heatsink. The good design point is the universal RAM clearance on the consumer platform. The heatsink comprises 5 nickel-plated copper heat pipes soldered on 56 fins. The copper base is also nickel-plated. The cooler packs a subtle A-RGB lighting under the top cover while maintaining the white outlook on the top. The cooler is compatible with the Intel LGA1200/115x/20xx and AMD AM4/AM3+/AM3+AM2+/AM2/FM2+/FM2/FM1 sockets. Here are salient features before we jump into DeepCool AS500 Plus Review:

The Plus name indicates the push/pull configuration out of the box. 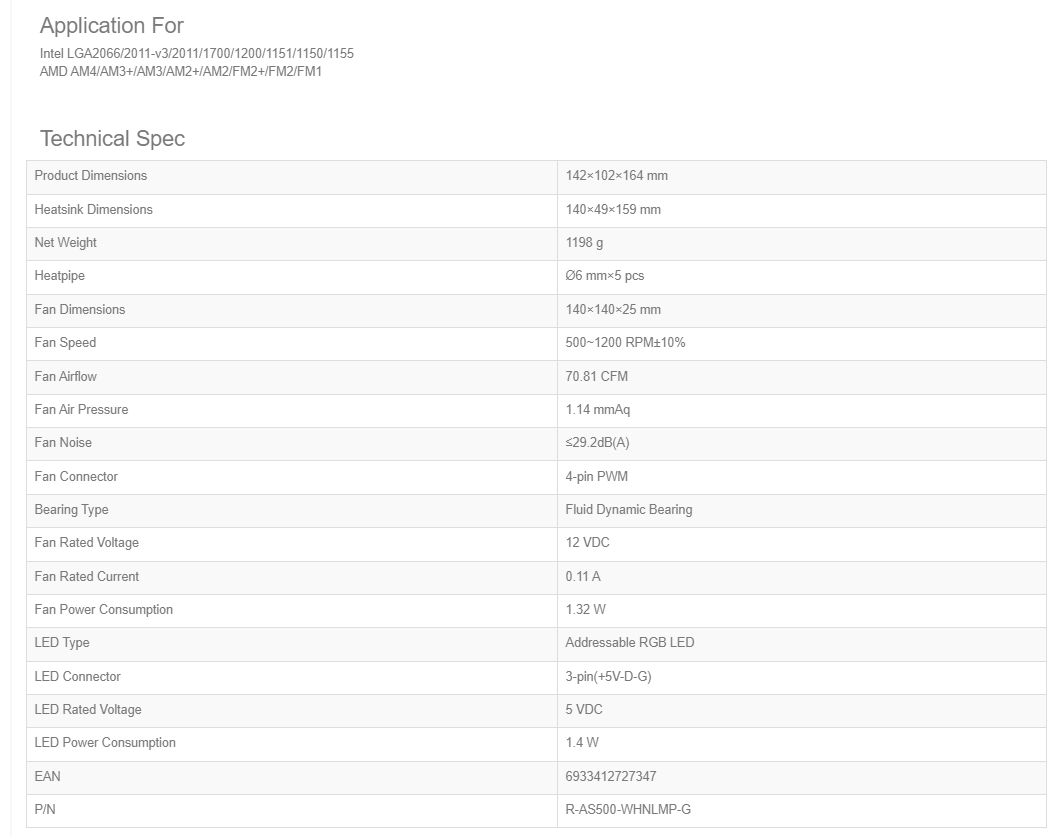 Packaging and Unboxing of DeepCool AS500 Plus

DeepCool has changed the packaging style of their products and I personally think, this new scheme is quite appealing and effective. All the information is printed on the paperboard surface which is placed on the cardboard box.

This is a high performance, slim tower cooler which is compatible with:

The cooler is rated to handle 220W TDP load and has 100% RAM compatibility. The height of the cooler is 164mm.

The cooler is nicely tucked between the two white color Styrofoam pads. There is an accessory box placed on the side.

Let’s take a look at what is provided in the box.

There is a brown color accessory box with mounting hardware.

DeepCool has provided an elaborative user guide for the installation of the manual.

There is an Intel backplate. The good aspect of this backplate is that the standoffs bars are now pre-installed which would reduce the installation steps.

The controller has a simple function. We have three buttons. The + and – buttons increase/decrease the speed of the dynamic lighting effects whereas the middle button changed the lighting mode.

There is a standard 3-pin connector cable that can be used to connect the cooler directly to the motherboard’s 5V header. It also supports the GIGABYTE older motherboards with a 3-pin format.

There is a PWM Y-splitter cable allowing the user to connect both fans to a single source.

Closer Look at DeepCool AS500 Plus

The AS500 Plus White is a single tower air cooler built for maximum RAM clearance with high performance. It is time to take a look at the main unit. Here is what Deepcool has to say about their new cooler, “The AS500 CPU Air Cooler balances optimal performance and compatibility in a slim single tower design. The solid copper base features five 6mm heat pipes that run along with a high fin density heat sink for quality heat dissipation while its minimal 48mm depth also ensures full compatibility with taller RAM modules. The high-performance TF140S FDB fan with PWM support offers to fine-tune control for quiet cooling and long-lasting reliability. Get a complete air cooling solution that provides excellent cooling performance and compatibility in the AS500.”

We have a white color top cover on the heatsink. It is quite stylish in the layout and it does not entirely cover the top fin plate of the cooler which further elaborates its design. There is a diffuser underneath the top cover which has digital RGB LEDs. The aurora of the lighting is quite pleasant on this cooler yet subtle.

The above picture shows the thick diffuser. It is a step design with the upper section running to the entire length of the fins whereas the lower or stepped down portion terminates leaving some gap on both ends.

The front and the rear or back sides of the heat sink are not identical in layout. The heat sink comprises 56 aluminum fins which are white color coated. This is not a dense design. The main central portion has an inset layout as compared to the sides. The width of the heat sink is 159mm. There is a gap of 1.6mm between any two fins. 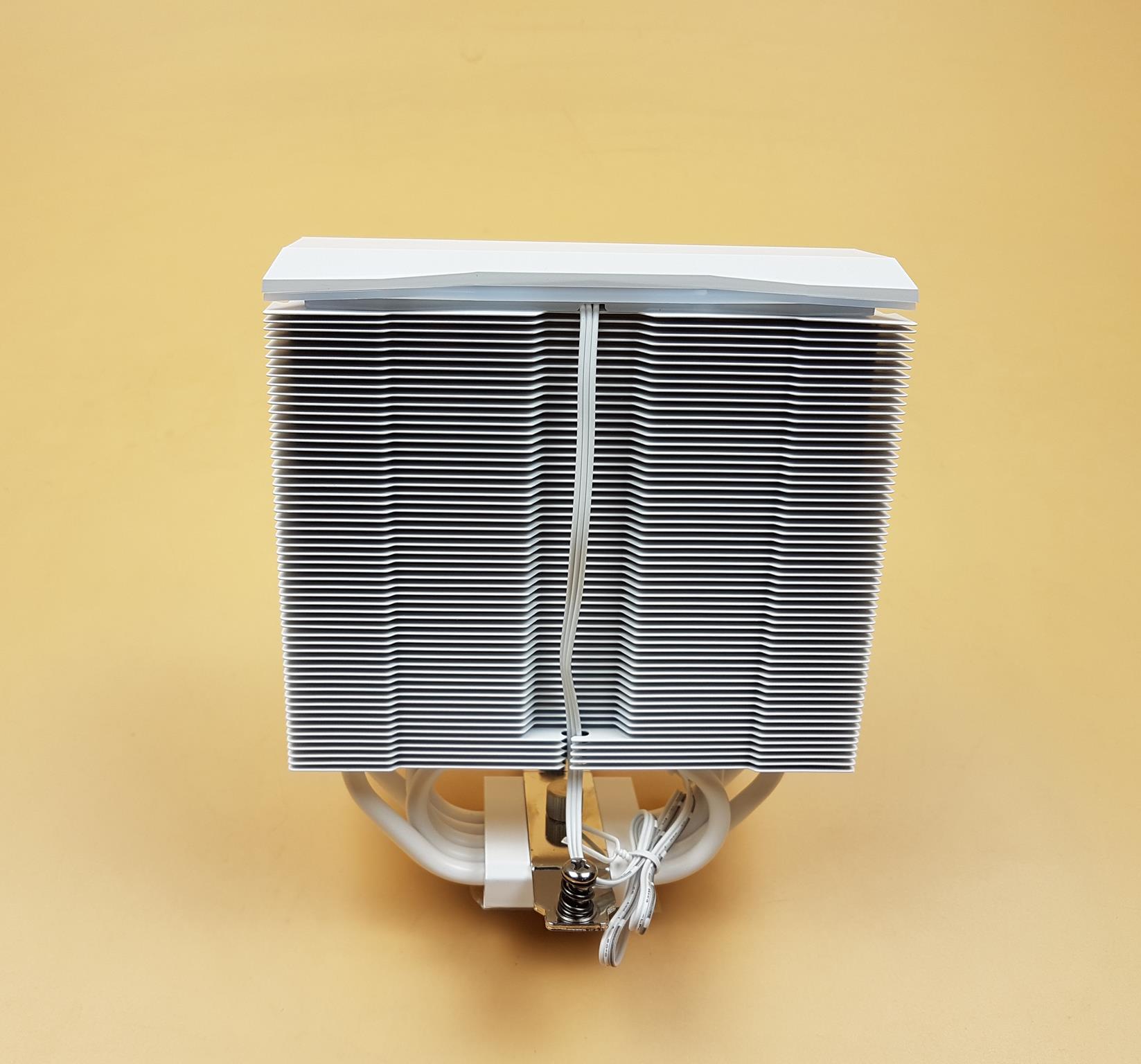 Looking at the backside we have a more stepped design as compared to the front side. The center portion has the most inset layout which makes sense as the digital RGB cable is routed on the center. The last four fins have a cutout through which the cable is passed towards the bottom. The cutout design acts like a catcher which prevents a fall-down design on the cable. I appreciate the attention to detail here.

The length of the 3-pin digital RGB cable is approximately 352mm. 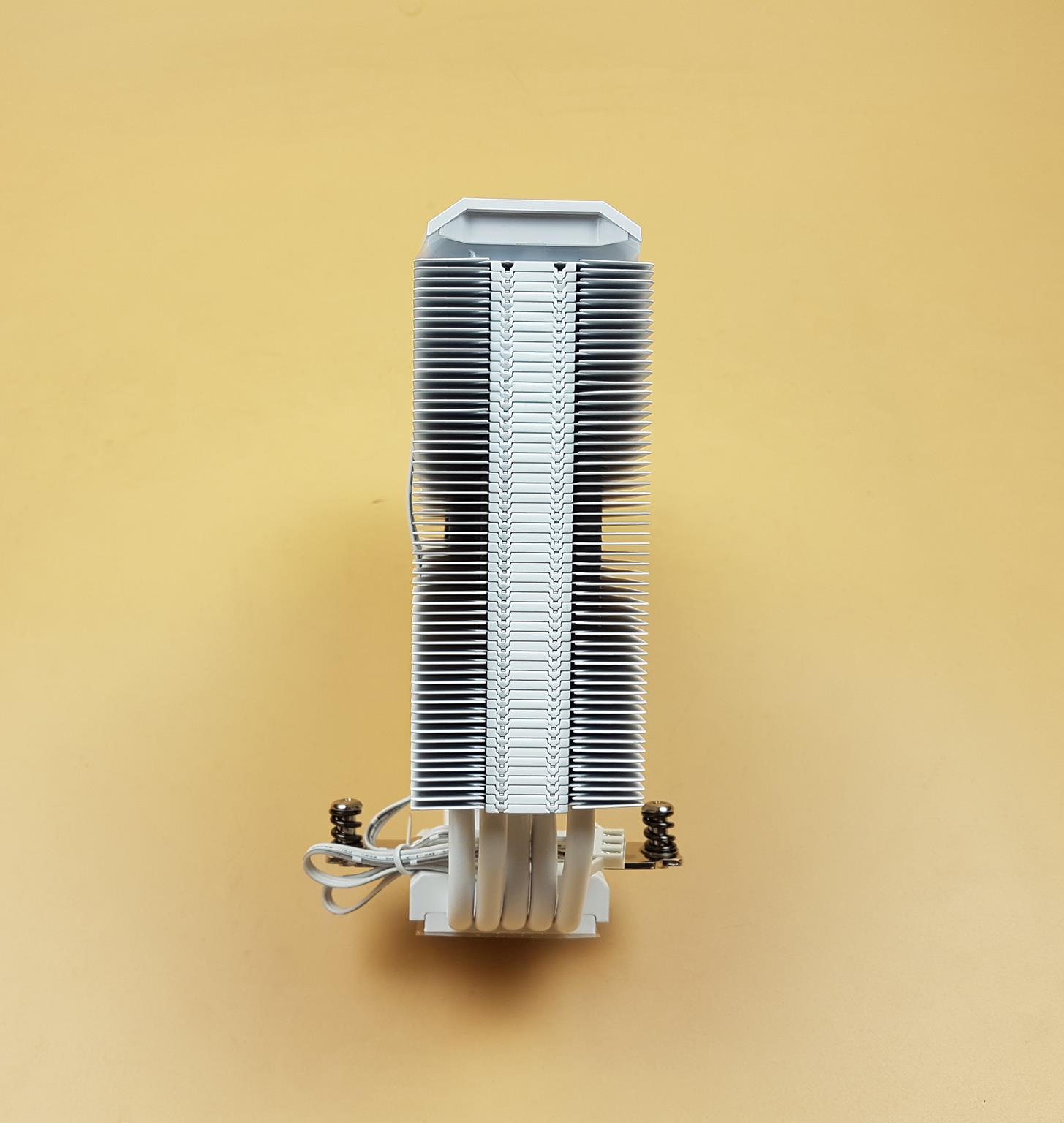 The left and right sides of the heatsink are identical in layout. The fins have a joint assembly here. The middle section has an inset and the sides have raised surfaces. This is where the heads of the fan clips are rested on. The width of the heatsink on the sides is 49mm.

The AS500 Plus White has the same 6mm thick 5x heat pipes as we have seen on the AS500 cooler. The pipes are also in a white color coating.

The nickel-coated copper base of the cooler has a dimension of 41x42mm. There is a protective cover pasted on it cautioning the user to remove it before the installation.

It is almost a mirror finish on the base.

Deepcool has provided 2x high-performance TF140S fans with the cooler. The fans are in white color. The frame is made of plastic. The fan body is quite rigid. There are 9 blades in each fan. These blades have a dual-layer design which is mentioned to increase the airflow up to 2.5m³/minute. There are shiny textures on the outer edges of the blades. These seem to be for the reason of aesthetics only though I am not sure. There is a sticker pasted on the center with the GamerStorm logo and textured pattern on the border. The noise-canceling teeth are distributed unevenly to avoid sympathetic vibration and thereby keeping the operation inaudible.

There are arrow symbols on the side of the frame. These indicate the direction of the airflow and the blades’ spin.

There is a 4-arm assembly holding the motor and blades to the mainframe. One arm is widened to form a passage for the wires. There is a catcher as well to make sure that cables don’t fall off. There is a black color sticker pasted in the center. TF 140S is the model of the fan. The fans are made in China.

The fans have a 4-pin PWM cable having an approximate length of 392mm.

Here are the specifications of the fan:

Here are the pictures of the assembled cooler.

We have to deal with 11 components in total to mount the installation kit. Effective from this content, we will not be giving detailed installation steps as the user guide is there to cover it.

The height of the cooler is 164mm. Keep this in mind while planning your build with respect to the PC Chassis as the chassis should have support for CPU cooler’s height of a minimum of 165mm or so.

As can be seen in the picture, the heatsink has no RAM clearance issue.

Even with the front fan, there is no RAM clearance issue.

The cooler does not block the first 16x PCIe slot on the MSI MAG Z490 TOMAHAWK.

DeepCool AS500 Plus RGB Lighting

DeepCool has provided a dedicated controller along with the sync cable. We connected the cooler directly to the JRainbow header on the MSI motherboard and found the digital RGB lighting responding to the change in modes seamlessly. Here are some pictures:

DeepCool AS500 Plus Benchmarks and Test

The following configuration has been used: – 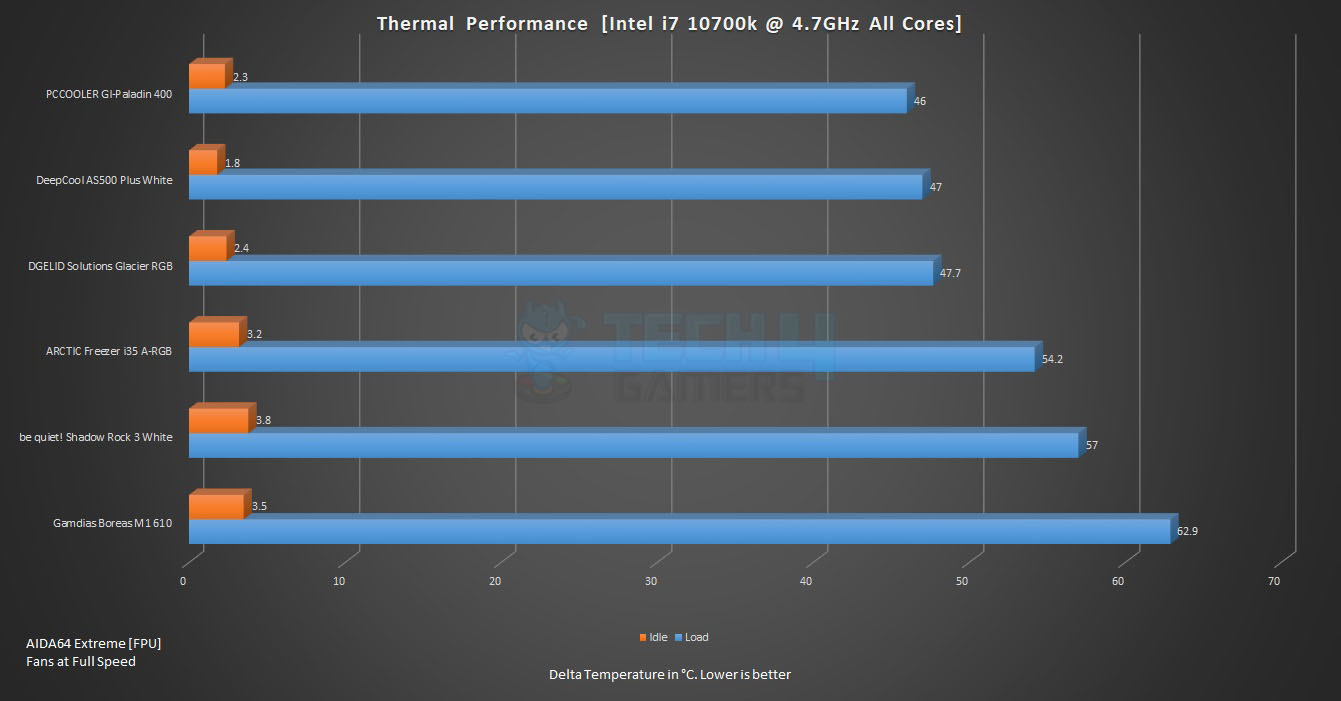 The DeepCool AS500 Plus White has a superb performance overall.

We are not measuring the noise output due to construction work going around the place. The overall noise level is higher than the original AS500 but no complaint as such given this is a push/pull configuration.

Is DeepCool AS500 Plus Worth Buying?

Now that we are done with DeepCool AS500 Plus Review – let’s talk more. We have earlier tested the Deepcool AS500. DeepCool has released the Plus version of this cooler where they provide a second fan for push/pull configuration. That just did not stop there as the company went on and released the beautiful White edition of the AS500 Plus cooler. I was quite excited about testing DeepCool AS500 Plus cooler and using it in the white builds. DeepCool hooked us with a review sample and we got to spin it for the performance evaluation.

The heatsink comprises 56 white-color-coated aluminum fins. There is a gap of 1.6mm between any two fins. We have a high-density fins count on this cooler in this size. The cooler has 5x copper heat pipes each having 6mm thickness. The complete assembly is in the white color coating. We have a nickel-plated copper base plate having a dimension of roughly 41x42mm which is enough to cover any chip on the supported sockets.

The AS500 Plus White has a white color top cover with low-profile digital RGB lighting under the hood. The A-RGB lighting is compatible with:

The overall build quality is top-notch. Deepcool has provided easy-to-use mounting hardware for convenient and easy installation of the cooler on any socket. The user manual is thorough. There is a dedicated digital RGB controller provided with the cooler which is a plus as it would help the users who don’t have a supported motherboard. The controller is SATA powered.

DeepCool is using a 3-pin proprietary connector on the digital RGB cables. There is a Sync cable provided as well which allows the solution to be connected to the digital RGB headers on the supported motherboards. The lighting aurora is quite pleasant and subtle to my liking. This goes hand in hand with the overall white color on the cooler. This is too good an anesthetic to have!

Deepcool has included 2x TF-140S fans in white color having a dimension of 140x140x25mm. The fans are secured using metal fan clips. The maximum rated speed on this fan is 1200 RPM with a maximum airflow rating of 70.81 CFM and a 1.16 mmAq air pressure rating. The overall sound level rating is up to 31.5 dBA and these fans are using Fluid Dynamic Bearings.

The AS500 Plus White has a height of 164mm making it compatible with most of the mid-tower chassis out there if not all. It has zero RAM incompatibility and no interference for the first x6 PCIe slot.

The Deepcool AS500 Plus White has an MSRP of PKR 13,000/- at the time of the review. The cooler was pitched against a variety of other air coolers as listed in the graphs using the Intel LGA1200 socket on the Z490 platform. The cooler offers fantastic performance and can handle any thermal load at hand except for the extreme overclocking.

We are thankful to Deepcool for giving us the opportunity to review AS500 Plus white CPU Cooler. 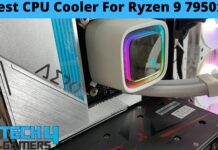 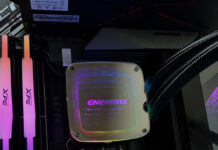 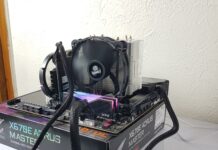 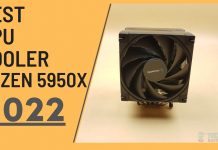 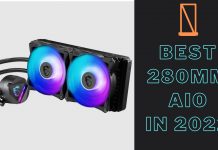 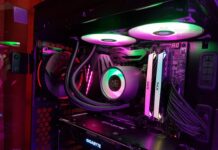 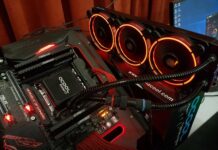 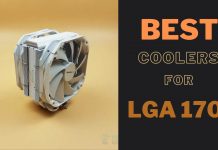 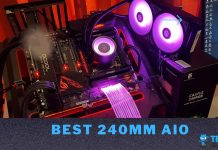 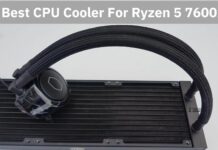 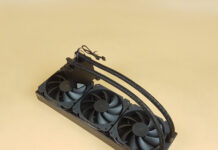 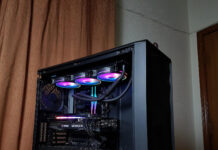 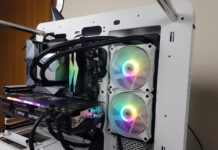 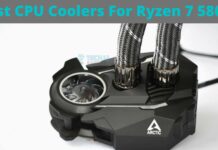 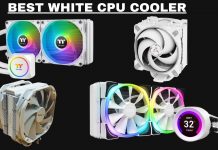