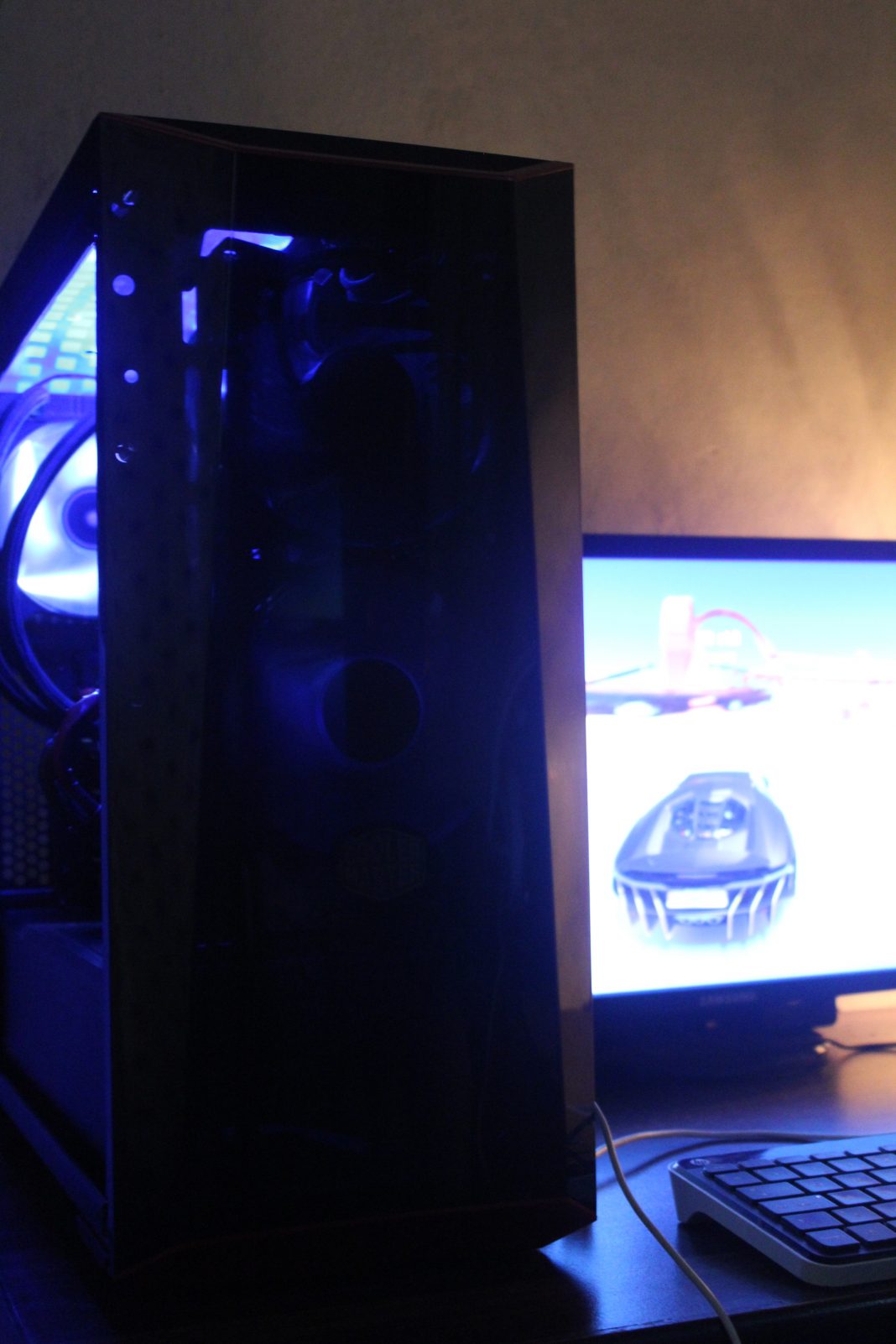 Cooler Master Co. is a computer hardware manufacturer based in Taiwan. Founded in 1992, the company produces computer cases, power supplies, air and liquid CPU coolers, laptop cooling pads, and computer peripherals. Alongside its retail business, Cooler Master also is an original equipment manufacturer of cooling solutions for other manufacturers including NVIDIA (VGA coolers), AMD (CPU coolers), and EVGA(motherboard heatsinks). The company has expanded its operation and brand exposure into the gaming community and sponsored major eSports events. Some of Cooler Master’s products have won awards including the iF product design award.

Cooler Master has a pride index in Tier-1 chassis for stylish and hassle-free PC builds. Although there are other next-gen brands like NZXT, Corsair, and Thermaltake which are taking the mid-tower chassis to next level but Cooler Master has redefined the term “Cooler Master” because of its “Cooling” as the first priority by giving consumer a massive wide-open opportunity to think out of the box and put his/her desire with a variety of clamps to emptiness fantasy, then taking care of other requirements every Entry Level Gamer or a PC Enthusiast is willing to Start or taking his/her Enthusiasm in PC Building to eternity!

The crust of Box is not that much colored or polished just a cardboard with a natural brown color. Sketch of the actual chassis printed on front and back side of the Box. Although either of the sides isn’t identical but still helps to guess whats inside the box so far! The left and right sides of the box aren’t identical too and there is helpful information written on one side and specifications on the other side. There is a most notable thing called “Black Transparent Glass” on the front side of the chassis which comes along for the first time in MasterBox series. The Black Transparent Glass reference text is written on back and front side of the box. Front side portraits the front and side perspective sketch of the actual chassis. Opening the box, the chassis is packed inside the box with the front face kept in the box’s opening. There is a foamy protection attached to the front and back side of the chassis which keeps it clear as the casing got some subtle fragile material (the front black tinted glass and side tempered glass). Giving a little care while unboxing is necessary and recommended. The chassis is covered by the plastic cover as a whole. Further putting off the plastic covered there is some more plastic sticked to the front and side tempered glass to keep it away from interactive scratches.

Cooler Master has provided a user manual to help in installation inside this chassis and a box full of various standoffs, screws, zip ties. They have included long screws in case additional fans are to be mounted if need be. They really didn’t show misery at giving lots of miniature stuff so the end user avails plenty of stuff to tuck inside the chassis firmly and make it look clean and eye-catching. I personally used all of these accessories free of any compromise still I missed a lot of screws and zip ties unused. The interesting part of accessories of MasterBox Lite 5 is the DIY changeable colored attachments. So you may change the secondary color of chassis any time you want. CoolerMaster has given 2 more color options along with red (default). Here I got a red and a black pair of changeable goodies which goes right on the top and bottom to the front black tinted glass. It’s just a few slides, unscrews and pull-ups or down away to change it anytime you want!

CoolerMaster Lite 5 got a prime front and iconic side view. It is nothing like any chassis we usually have seen. It comes with the front transparent black glass which lets the user have a peek at whats inside. Initially, it is pitch black from the front. The material is glossy though. Having two ventilation spots, one at top and one at the bottom keeps the front side ventilation meaningful and the airflow breathtaking for pumping hardware. You can install either three 120mm fans or two 140mm fans. The front tinted black glass shifts from solid to transparent as long as something is glowing from inside the chassis. Quite mesmerizing to sit at front of it and look at the stuff you got in there.

The right side from front facing, there is a removable steel dashboard coated with matte black paint. Not glossy and bulgy at all. But still, I managed to fit all my cables inside the unnotable space and so called its the best case to fit in all sort of unwanted/non-presentable cables and switches. I merely found myself successful at hiding all sort of cables and prevent them wander in the “Spotlight” of majestic view. The left side from the front face is the whole transparent tempered glass having four bolts attached to each end with rubbered pricks so one can fasten the glass to the chassis firmly as it doesn’t shake when given the chassis some jolts. It’s the viewpoint to all the precious stuff you got in there. So there is not metal or plastic frame on it, totally tempered glass as a whole. The back side of the chassis as usually consists the I/O and air outlet. There is an unmountable PSU bracket frame to pin in the PSU at bottom most space.

Beyond it, There are removable PCIe stick gates. Above, There is I/O plate section, beside it there is a 120mm fan outlet for destined ventilation. Finally, at the bottom of chassis, there is a dust filter for PSU fan outlet and 4 uplifting stands which lifts the chassis up enough to clear some space to cross the air from the bottom through the PSU. The topmost phase of chassis is plain and got no ventilation spot. There are two USB 3.0 ports, one 3.5mm audio and mic jack, a power button at the center of these ports and jacks, a white LED for disk activity and a mini restart button which is only vulnerable/pressable by using pinky finger so no accidental triggers may happen. When the PC is powered On the power button illuminates via white backlit.

Comparing the size to a full tower chassis Corsair 780t we can conclude that this little MasterBox Lite 5 is allowing the user to pin one as much hardware as the full tower does but only lacks that much airflow from front and from the top.

Note: The actual material is plastic/acrylic in the whole chassis instead of actual glass. But the outcome of their appearance is glassy so I am keeping up the relevant vocabulary!

Seeing on the inside there is one fine thing which derives my satisfaction is a fully partitioned basement to house the PSU and have two Hard disk drive bays. There is enough space to keep the extra cables to disengage in the middle of Hard disk cabinet and PSU space. The HDD bays are a bit mechanical which is a good thing to new chassis generation, many have got the HDD bays damaged while trying to fit in HDD firmly. These mechanical HDD bays minimized the risk of such a pity damage, it gets stretch by pressing a clip below the bay and once you placed your hard disk correctly close it back and swipe it in where the bay belongs to! There is some empty space beside the basement towards the chassis’s front side. You can either place a fan there for frontal airflow continuity or can put up to two more hard drives as temporary since there is no legitimate support for putting them there.

On the upside/ceiling, there is no opening or even the holes to even keep up the vertical airflow. On the front facing side of chassis (inside/removed the front black glass), you can either place the fans on the inside (as there is plenty of space on the whole right side, inside the chassis) or put the fans attached outwards the chassis cage and afterwards you still can put on the front black glass again as it is designed for it! I personally attached two fans outward and putting front black tinted glass at the same time.

The whole internal skeleton (metal cage) is coated with matte paint so there would be more illumination inside the chassis if LEDs or RGB Lights/Fans installed.

The final showdown of MasterBox Lite 5 is as follows:

Does the MasterBox Lite 5 worths $50? My answer is, yes! As it is labeled as entry-level chassis so there are limitations and still it’s all above board that Cooler Master offered in such a satisfying and ultimately questionable price. We rush to options having fewer questions this is why I am writing about the MasterBox Lite 5. You can know whatever you ever wished to, by referring to my experience i wrote here. On the disadvantages depth, I personally experienced two…

1- No ceiling ventilation spot so I could attach my Corsair  H110i CPU cooler’s radiator thus using stock Intel Cooler (You still got one radiator attachment option at rear side by removing the stock fan which comes along with the chassis as i installed radiator of GTX 1080 Sea Hawk GPU).

2- Frontal airflow is not that adept as it should be like Corsair Spec 04 (which also costs $49) since there are only two tiny linear spots to suck the air in and the dust filter on them adds more hustle to suck in a sufficient amount of air.