When it comes to PC Cooling and Chassis, Cooler Master needs no introduction. Ever since its foundation in 1992, the company rolled out its first CPU Cooler in 1993 with major breakthrough coming in 1999 when their first all-aluminum based handmade chassis was launched. There was no stopping to the continuous innovation that took the company to the new frontiers of introducing liquid cooling solutions, power supply units, gaming peripherals, etc. Cooler Master is making strong come back in recent times with their cooling solutions and chassis.

Cooler Master has sent us their White edition of MF210 Halo fans. The most obvious thing about these fans is their dual-ring A-RGB lighting which in my personal opinion is well-executed, giving these fans a killer look (looks are subjective though!). Take any side of these fans and you will find the A-RGB light show. Cooler Master is marketing these fans as the specific air cooling solution ideal for the CPU air coolers and the chassis intake fans. As is the case with the Master Fan series lineup, these fans also feature a sensor for Jam protection. These fans are only available in a single fan pack that comes without a controller.

Here are the salient features of the products:

*Price is taken at the time of the review 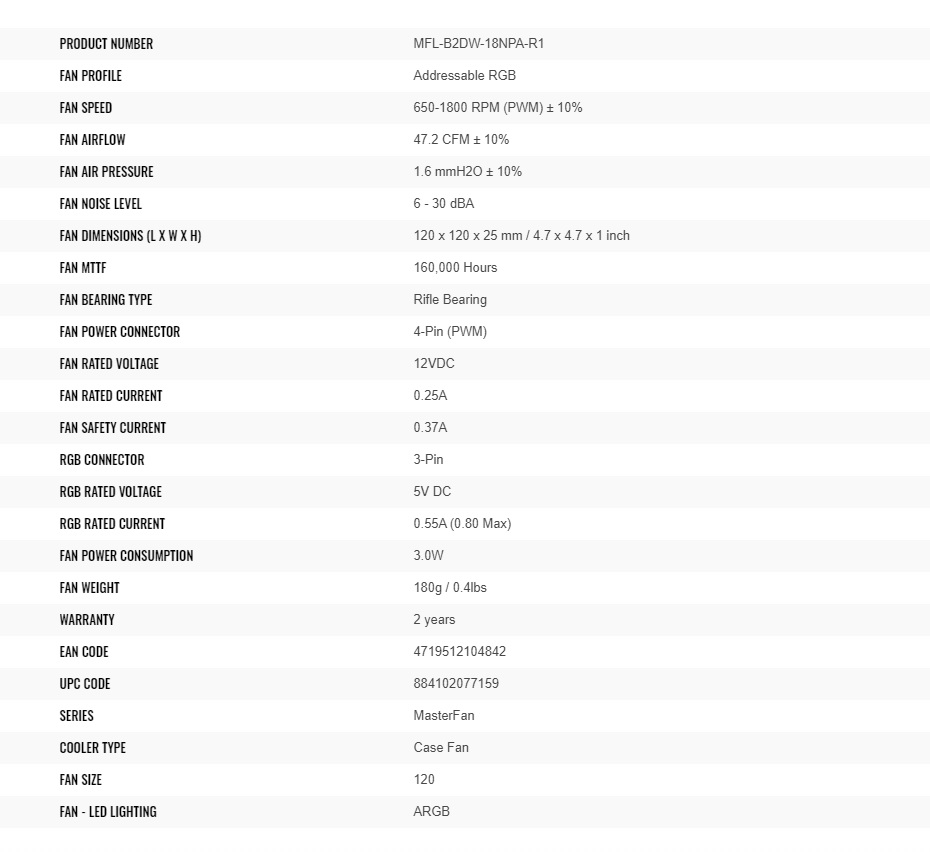 The MF120 Halo fans are shipped inside the cardboard box in Cooler Master Style packing. 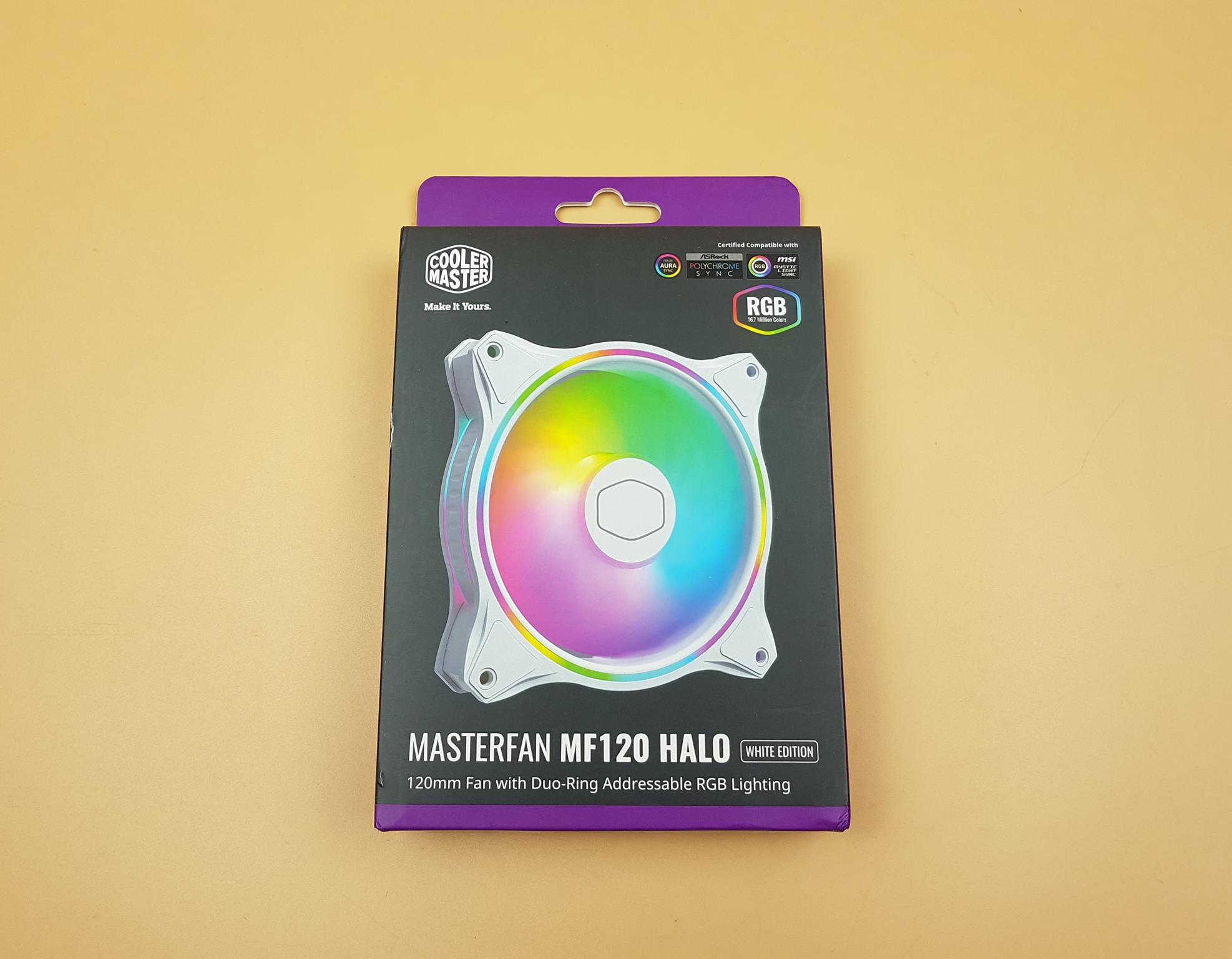 The box highlights ARGB lighting on the fans. The lighting is compatible with:

The fans feature 16.7M colors illumination. There is no compatibility with the GIGABYTE RGB Fusion 2.0 mentioned. Since these fans are using standard A-RGB (3-Pin) connectors, these should work with RGB Fusion 2.0 in my opinion. 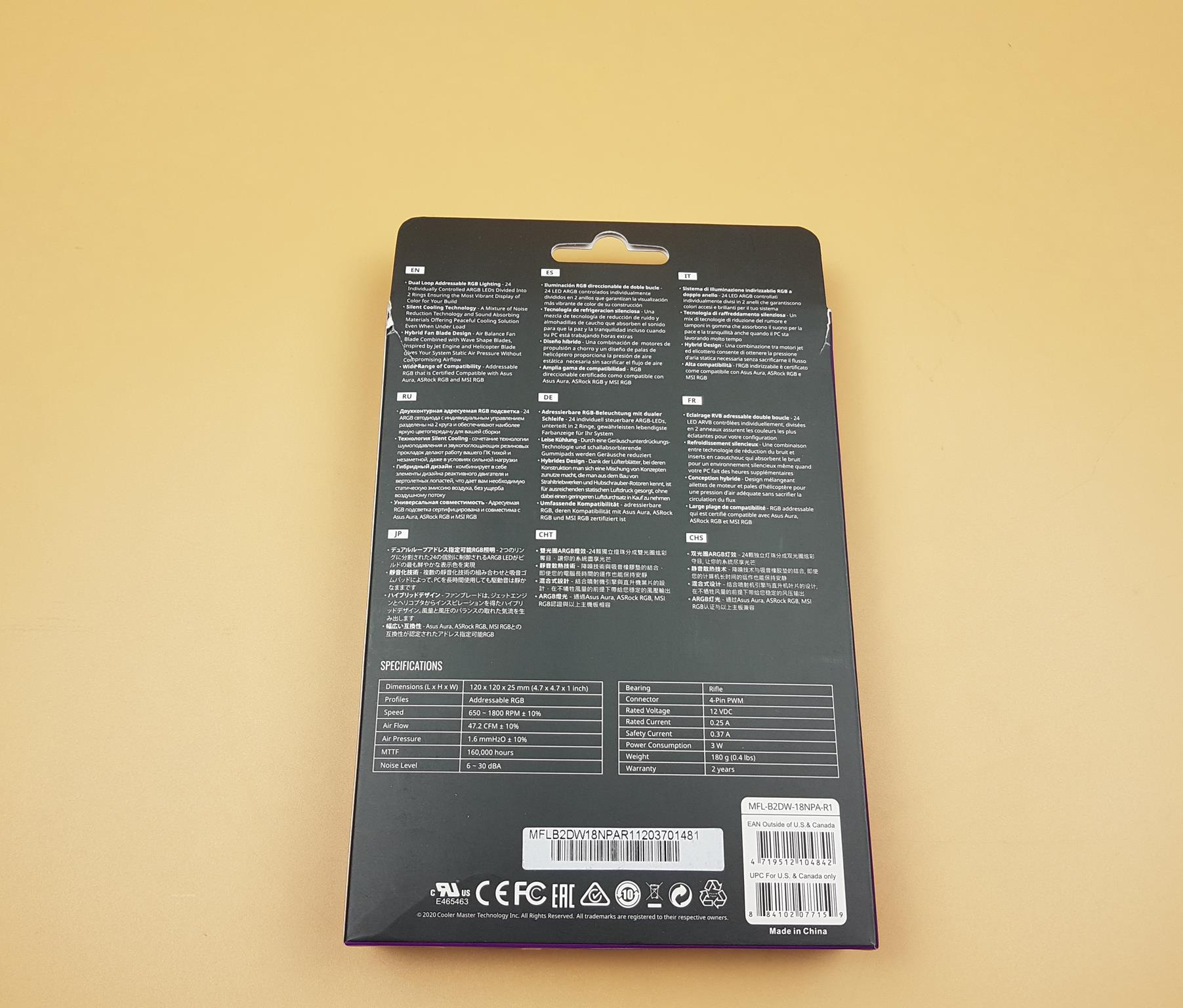 Features are printed in 9 languages along with the specifications. 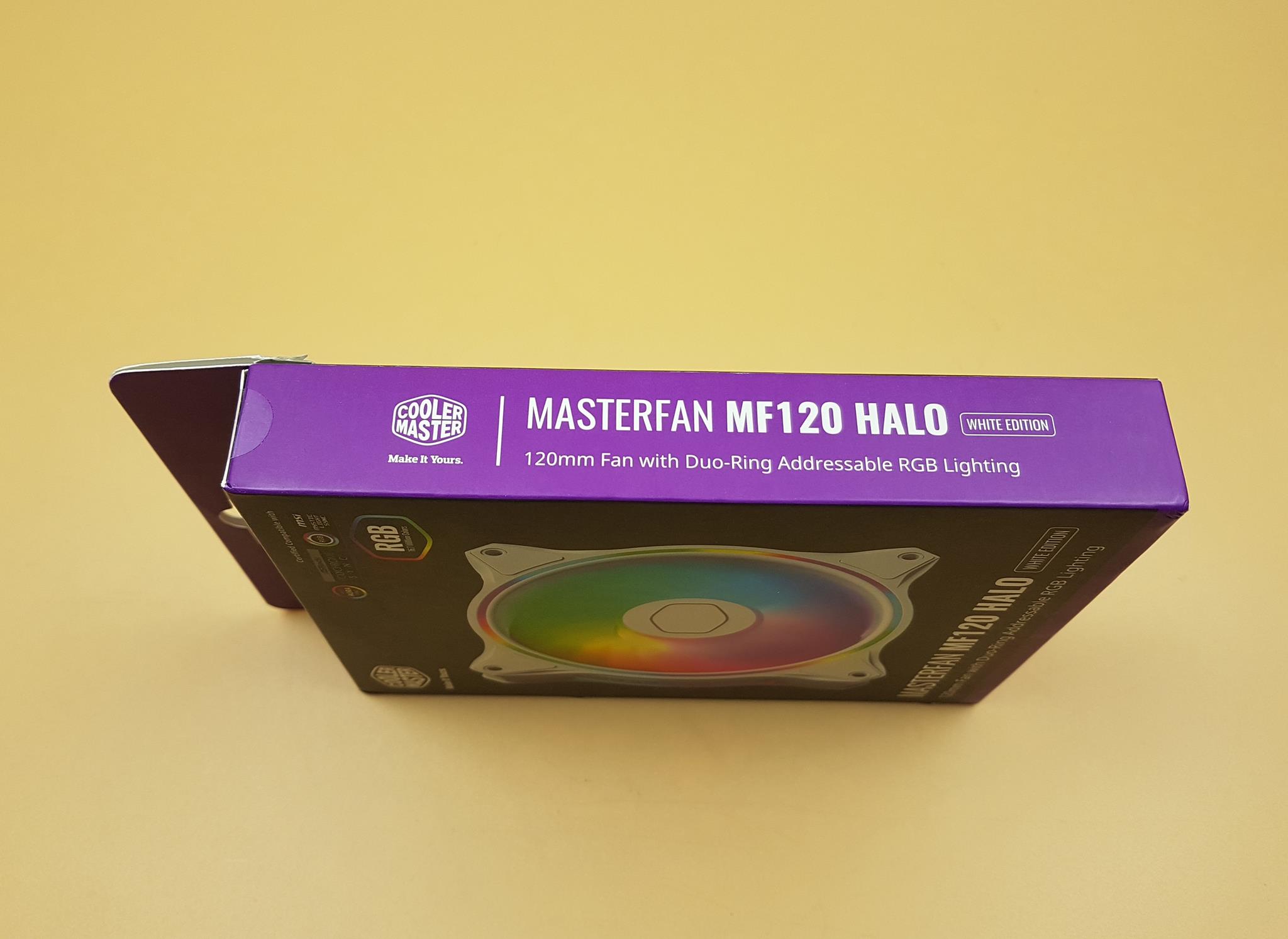 These are 120mm Duo-Ring A-RGB lighting fans from the Cooler Master. 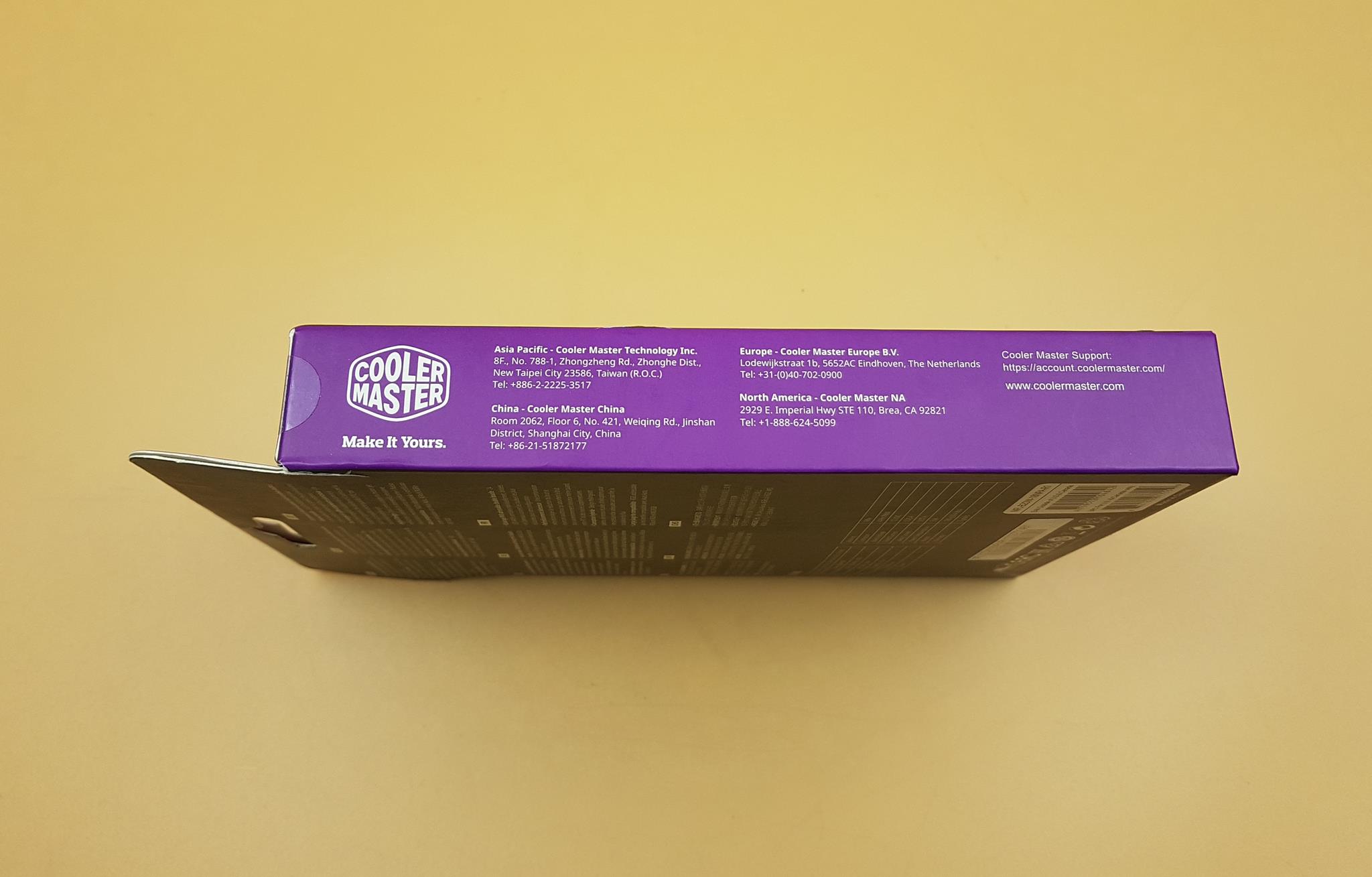 The company’s contact information for various regions is printed. 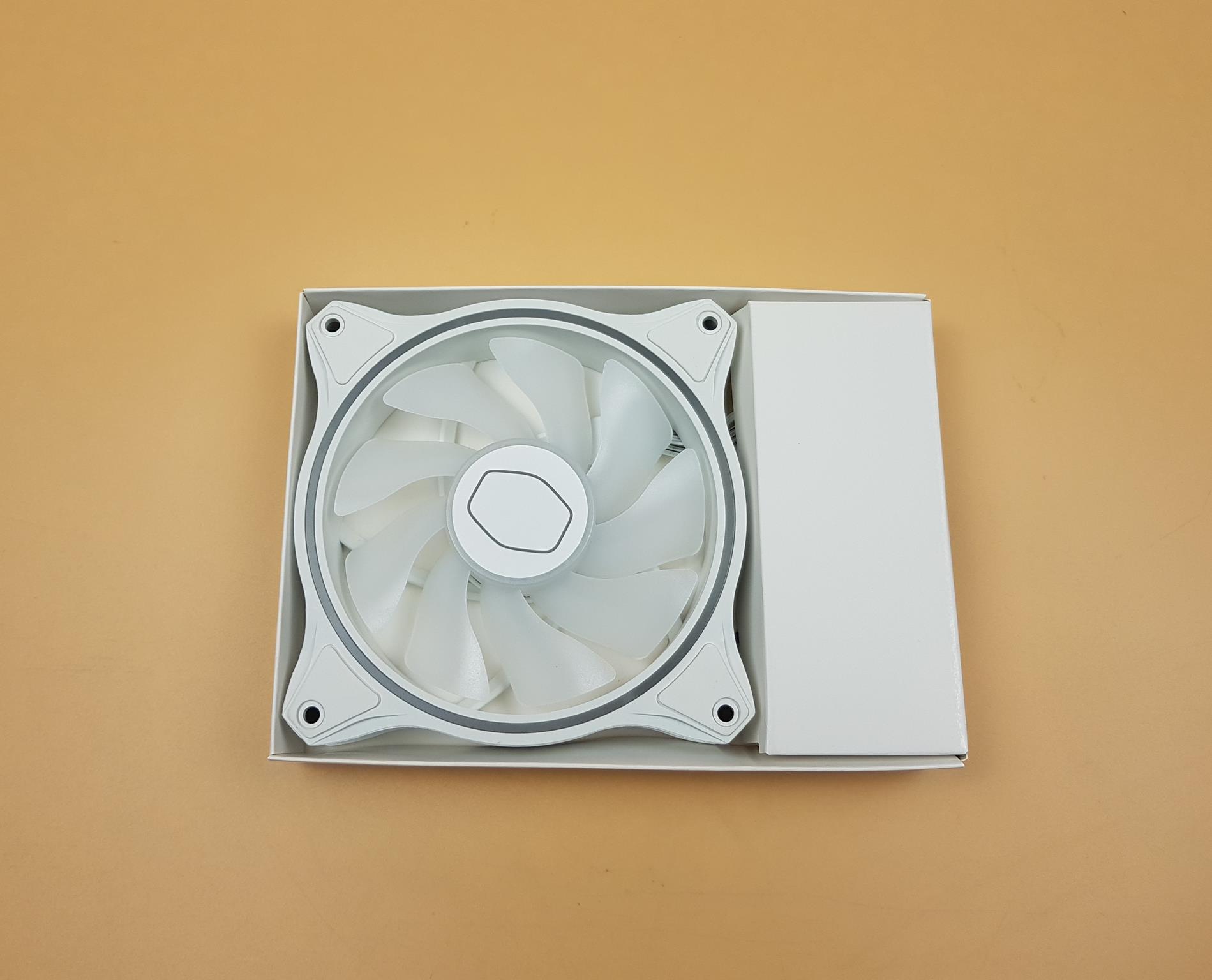 There is a white color paperboard container inside the main packing box. It has the fan along with the screws and cable cover inside. 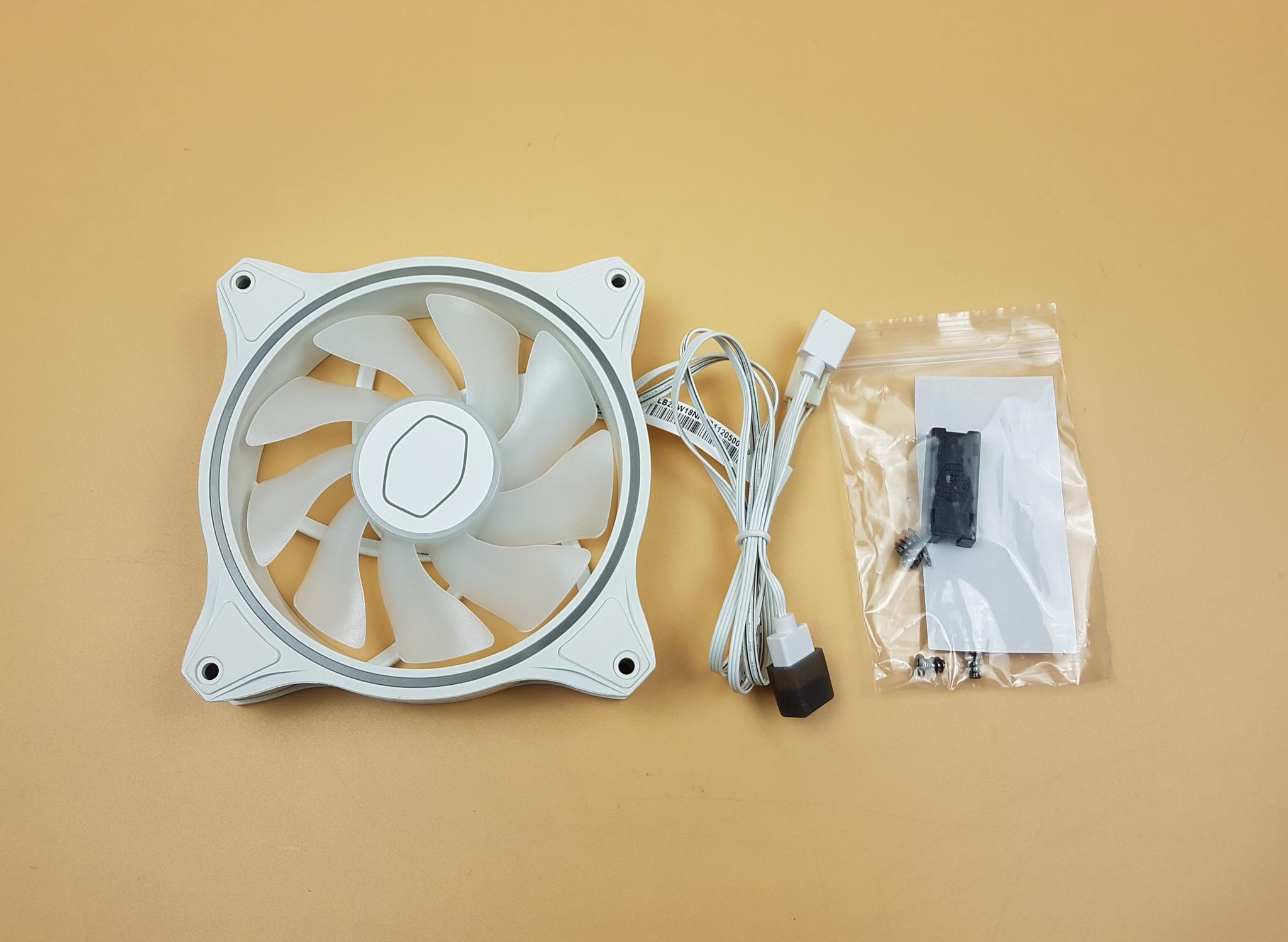 Let’s start with what Cooler Master is saying about their fans, “MasterFan MF120 Halo, a new series to the MasterFan family, provides a specific air cooling solution ideal for CPU coolers and chassis in-take fans. With dual Loop Addressable RGB Lighting ensuring the most vibrant display of color for your coverage and generate high-pressure airflow. MF120 Halo is fitted with multiple layers of our exclusive noise reduction technologies and a perfect blend of fan blade design that put together work in harmony to cool your entire case and its components in silence.” 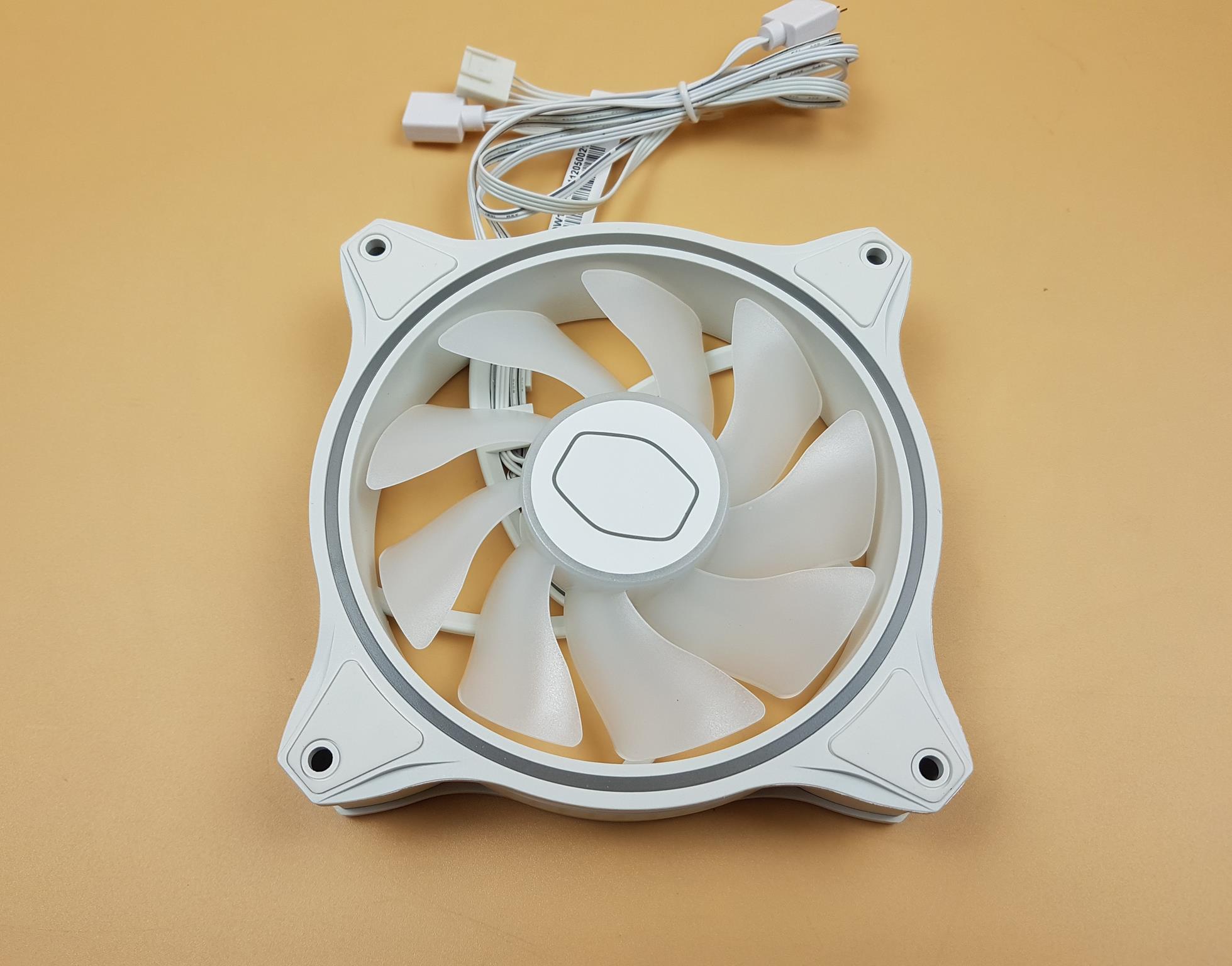 The MasterFan MF120 Halo White has 9 frosted blades in a specially designed wave pattern. These fans feature a combination of a jet engine and helicopter blade designs resulting in maintained static air pressure without sacrificing airflow. These fans have smart fan sensors built into them. This sensor makes the motor immediately stop spinning as soon as any foreign object hits the spinning blades. There is a Cooler Master branded sticker in the middle. 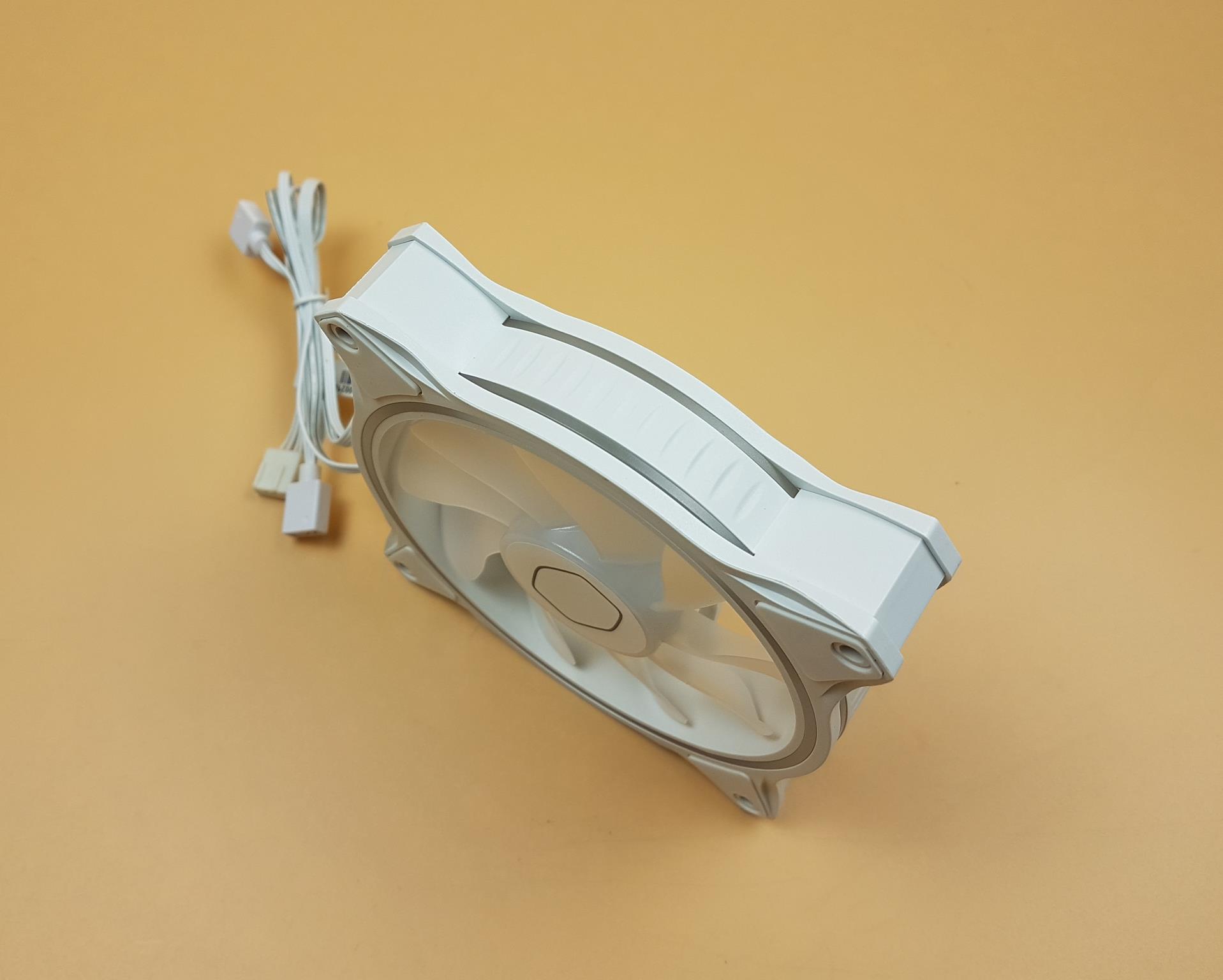 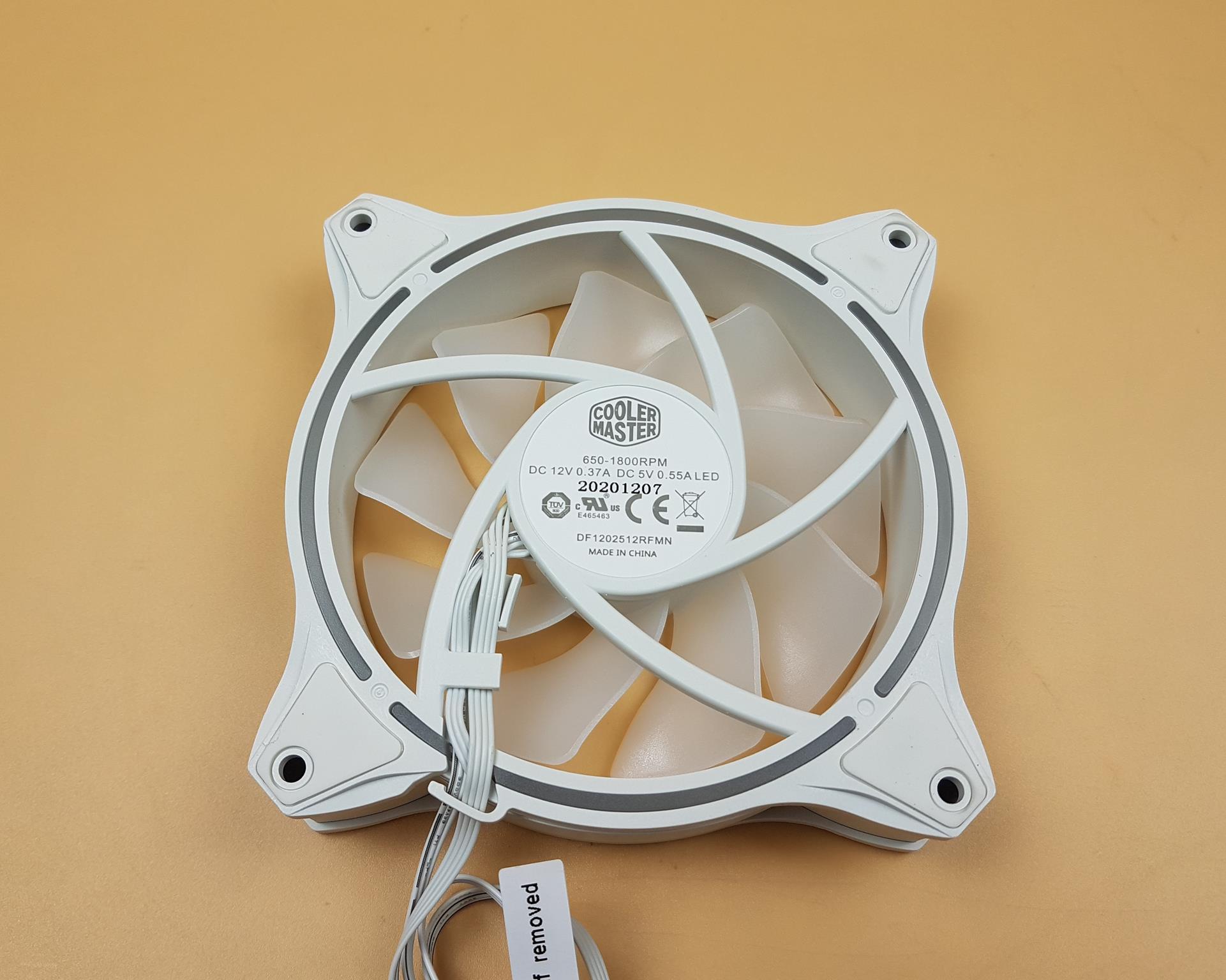 There is a 5-arms assembly on the rear. One arm has two latches to hold the cables coming out of the center. There is another catcher on the borderline of the frame from where the cables are finally out of the frame. These catchers prevent the cables from falling. We have a Cooler Master brand logo up top on the sticker and the power rating of the fan and the LEDs. The fans are made in China. These fans are using Rifle bearings with MTTF of 160,000 hours (for the fan). 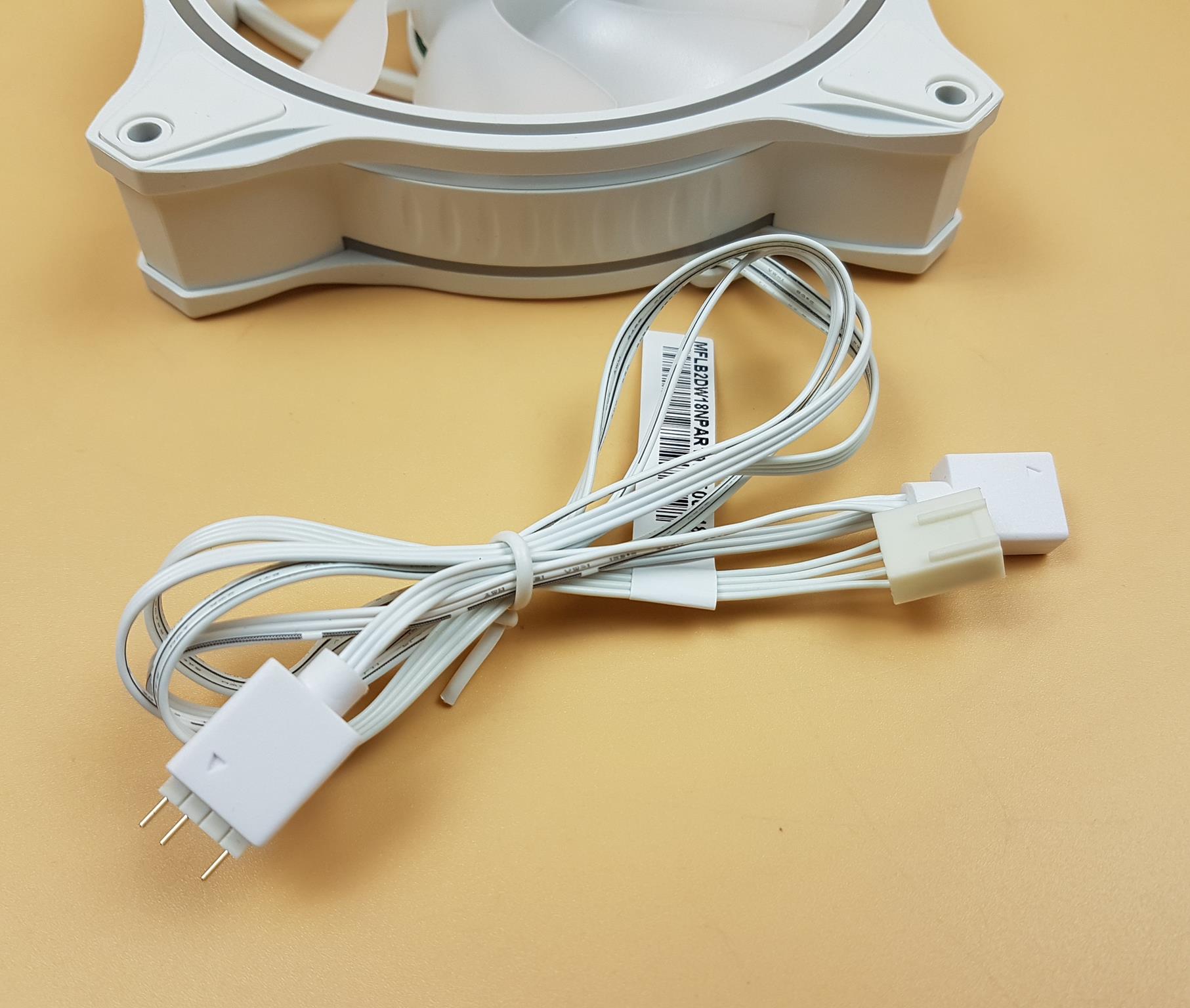 Each fan has two flat cables which are also in white color. 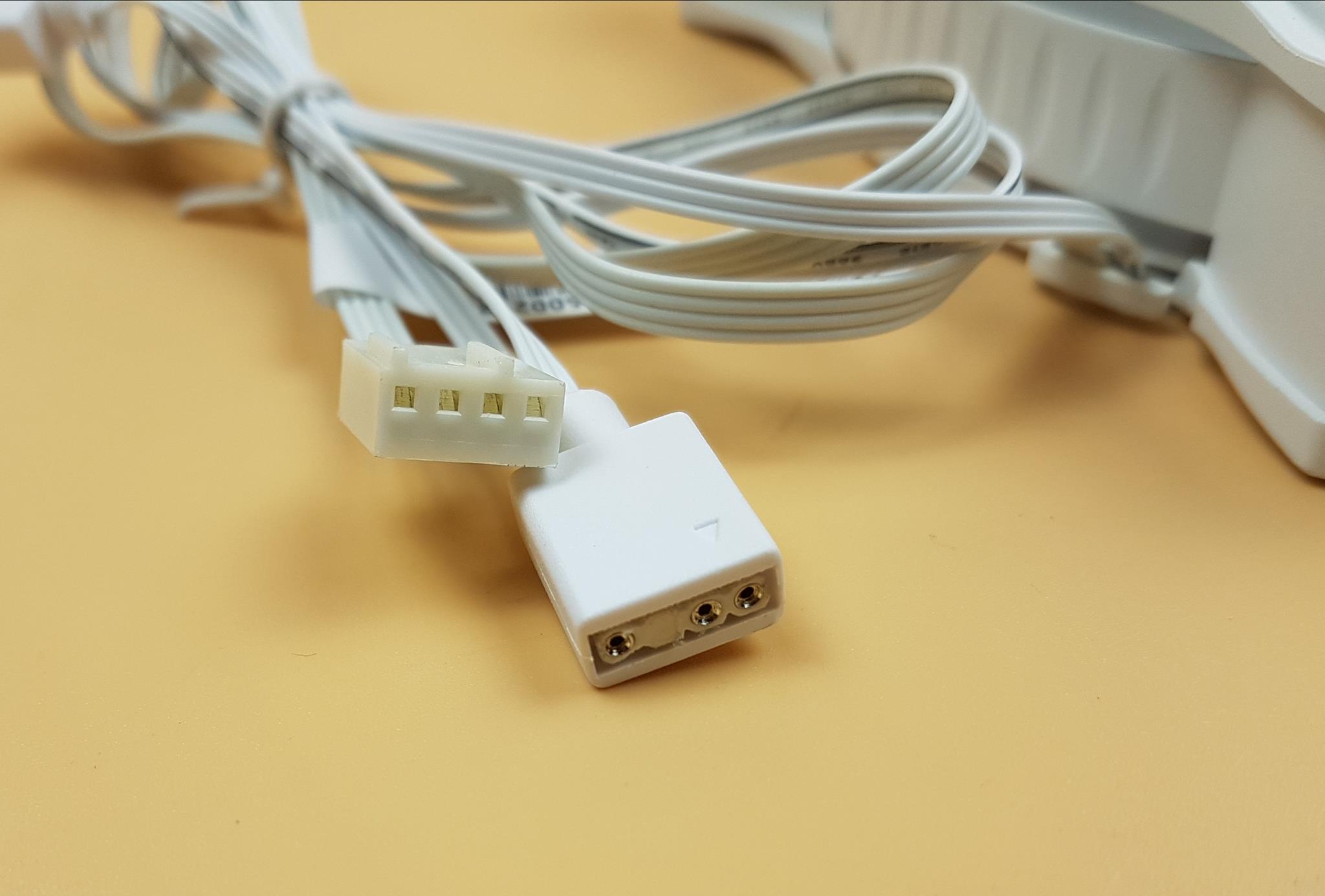 Let’s take a look at the specifications of the fans:

We earlier looked at the black or standard edition of these Halo fans which does come in a 3-in-1 pack with the controller as well. At that time, there was a though in the mind that the white edition of these fans would make for a killer look in the build particularly for the white builds. Having taken a look at the white edition, I am sure, that thinking was not wrong. Though we have some decent airflow and static pressure rating making these fans useful for the caser airflow than for the heat sink use. Here are a few pictures for your eyes pleasure:

Following test benches have been used: –

Following software were used for testing and monitoring.

We have tested the Cooler Master MF120 Halo fans on the Cooler Master ML240L V2 ARGB cooler which comes with their two new Sickleflow A-RGB fans. In order to establish the reference point for the comparison, the thermal testing was done using the stock fans and then with the MF120 Halo fans with the new thermal paste application. The Sickleflow 120 ARGB fans have the following data:

We have also added the result of testing the standard/black edition of the MF120 Halo fans. 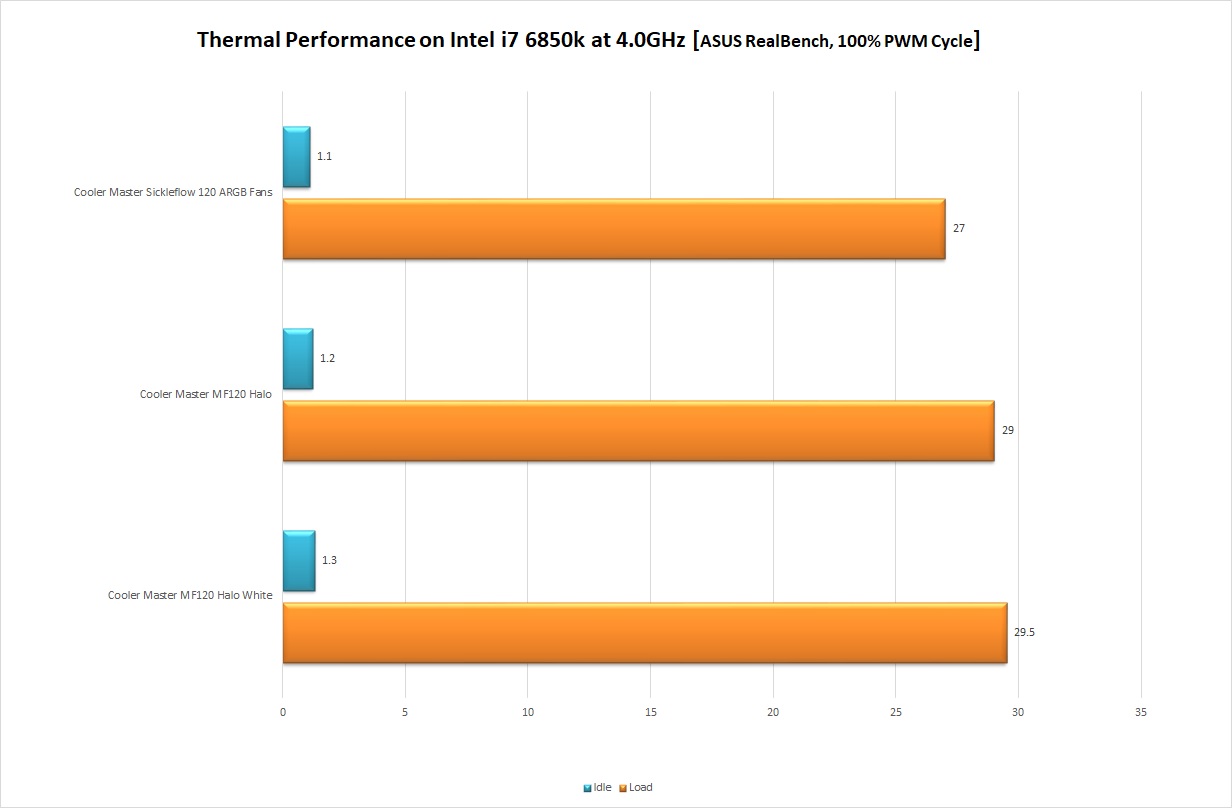 At full speed, there was an approximate difference of 2.5°C which is understandable as the Sickleflow fans have better airflow and air pressure rating. 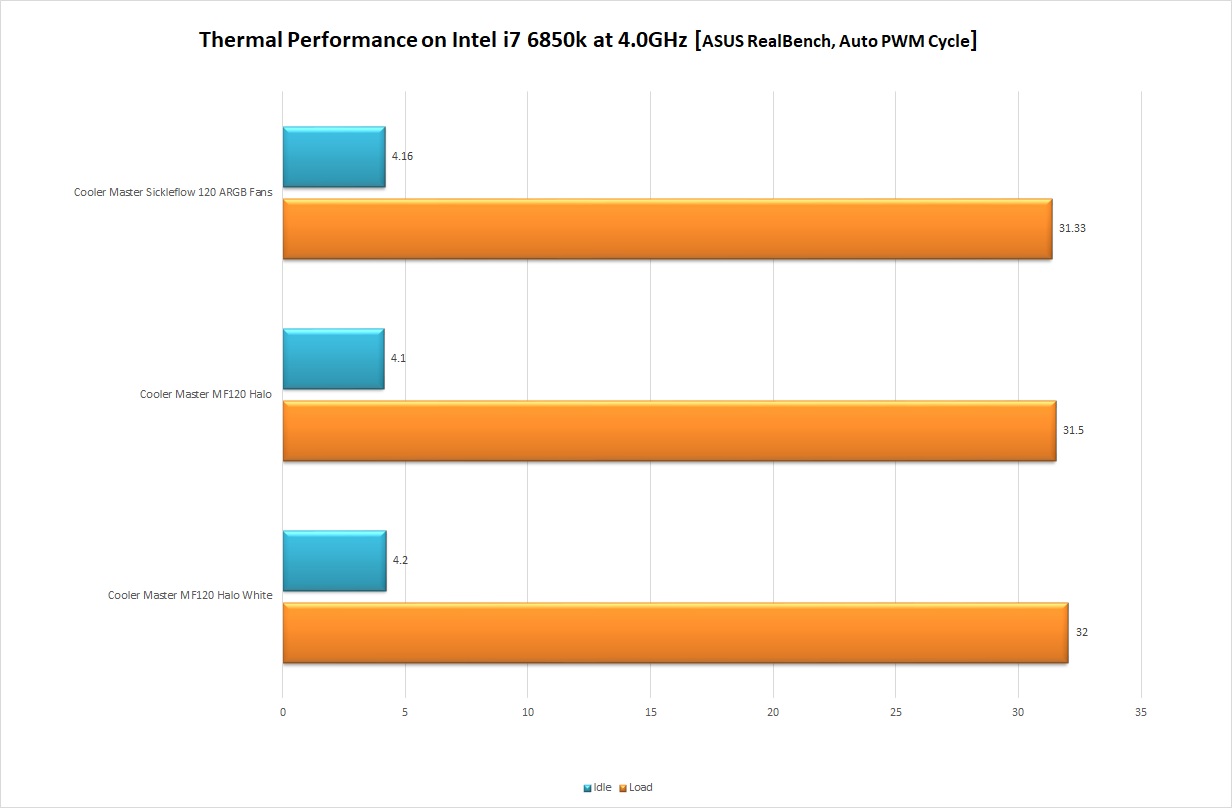 There is not much of a difference here. On Auto PWM the MF120 Halo fans were operating at the 900 RPM mark which is almost half the rated speed.

The Cooler Master has released their new fans in the MasterFan line. These are MF120 Halo fans available in a pack of 1 and 3 fans for the black color. Cooler Master has also released the white edition of these Halo fans and at the moment they are available only in a single fan pack without a controller. Cooler Master has informed that they will soon release the 3 fans pack in the white color as well. The killer feature of these coolers is the dual ring digital lighting which definitely looks absolutely amazing in person and would add more to the overall look and feel of the build particularly the white build.

Each fan has 9 frosted blades designed in a wave pattern to balance the airflow with moderate static pressure. These fans feature a sensor and would stop spinning if any object touches the blades. This safety feature would definitely come in handy. Everything about these white edition Halo fans is white from head to toe! We have cut-to-design anti-vibration pads pre-installed on the mounting corners. The MF120 Halo White fans feature digital lighting in Dual Loop. The dual rings and the center of the fans pack A-RGB LEDs and these give one heck of an AURA of a light show. One ring is on the front side and the second on the backside. They are integrated into the mainframe.

Each fan has two cables. Both are flat in design and they are also in white color. One cable has a 4-pin PWM connector (in white as well) to power the fan and the other cable has the dual-connectors A-RGB cable with connectors in the white color as well. The user can daisy chain the A-RGB cables and connect a single connector to the source. These fans are compatible with ASUS AURA SYNC, MSI MYSTIC LIGHT SYNC, and ASRock POLYCHROME Sync. There is no compatibility information with regard to the GIGABYTE RGB FUSION 2.0. Since these fans are using the standard 3-pin A-RGB connectors using pin format of +5V, D, , G, these fans should work with any controller or motherboard featuring the standard header.