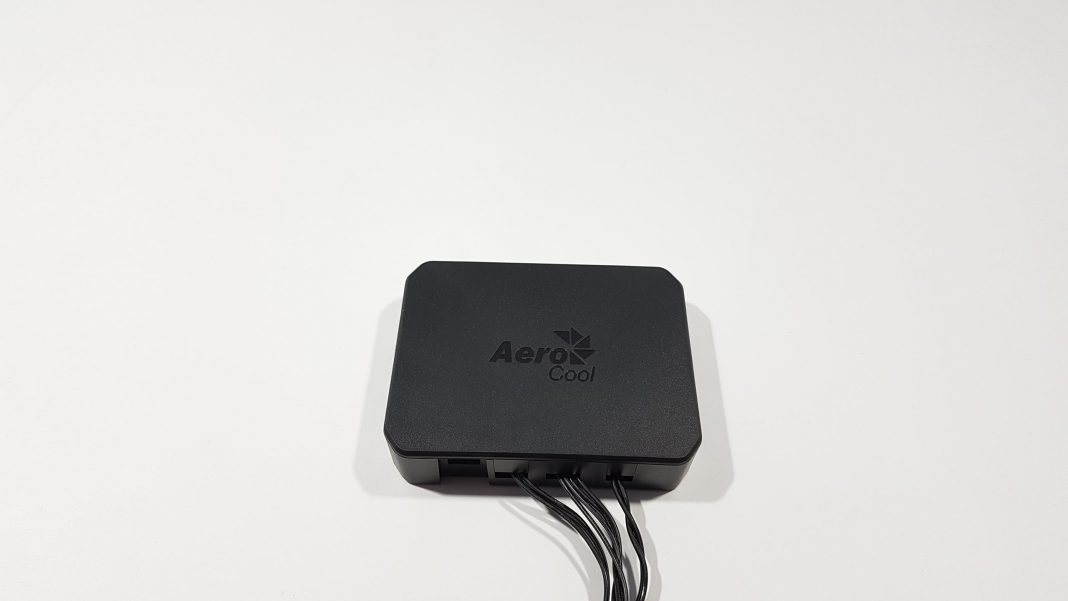 AeroCool Advanced Technologies (AAT) was founded in 2001. Aerocool is known for their innovative designs like they were the first company to introduce the U-Shape heat pipe design for the CPU Coolers which now has almost become a norm in air cooling. Similarly, they were the first company to introduce the double-bay front panel controllers. Today, Aerocool is among the market leaders in the “Gaming Market”. Their product lines include Gaming Chassis, PC Cooling, Power Supply units, Gaming peripherals, gaming furniture, accessories to name a few. Aerocool is not a new name to me. I bought their DS series fans back in 2014 or so when I was doing my X99 build on Rampage V Extreme and these fans exceeded my expectation from them.

Aerocool has sent their Project 7 series L240 CPU cooler and H1 RGB LED Controller hub for the review. Project 7 is the Aerocool’s branding for their RGB Gaming line up of enthusiast level products ranging from PSU to Fan to the Chassis. Today, we will look at their P7-H1. This is their controller hub solution to sync and integrate all of their RGB products much like NZXT Hue+ and Corsair Lighting Node Pro/Commander Pro. The P7-H1 is a 5 port Fan hub with two RGB ports for connecting RGB Fans, RGB LED Strips, RGB PSUs, and Chassis. This approach would provide the user to control all of Aerocool’s RGB products using a simple software control with this hub.

Aerocool has provided following accessories in the box: 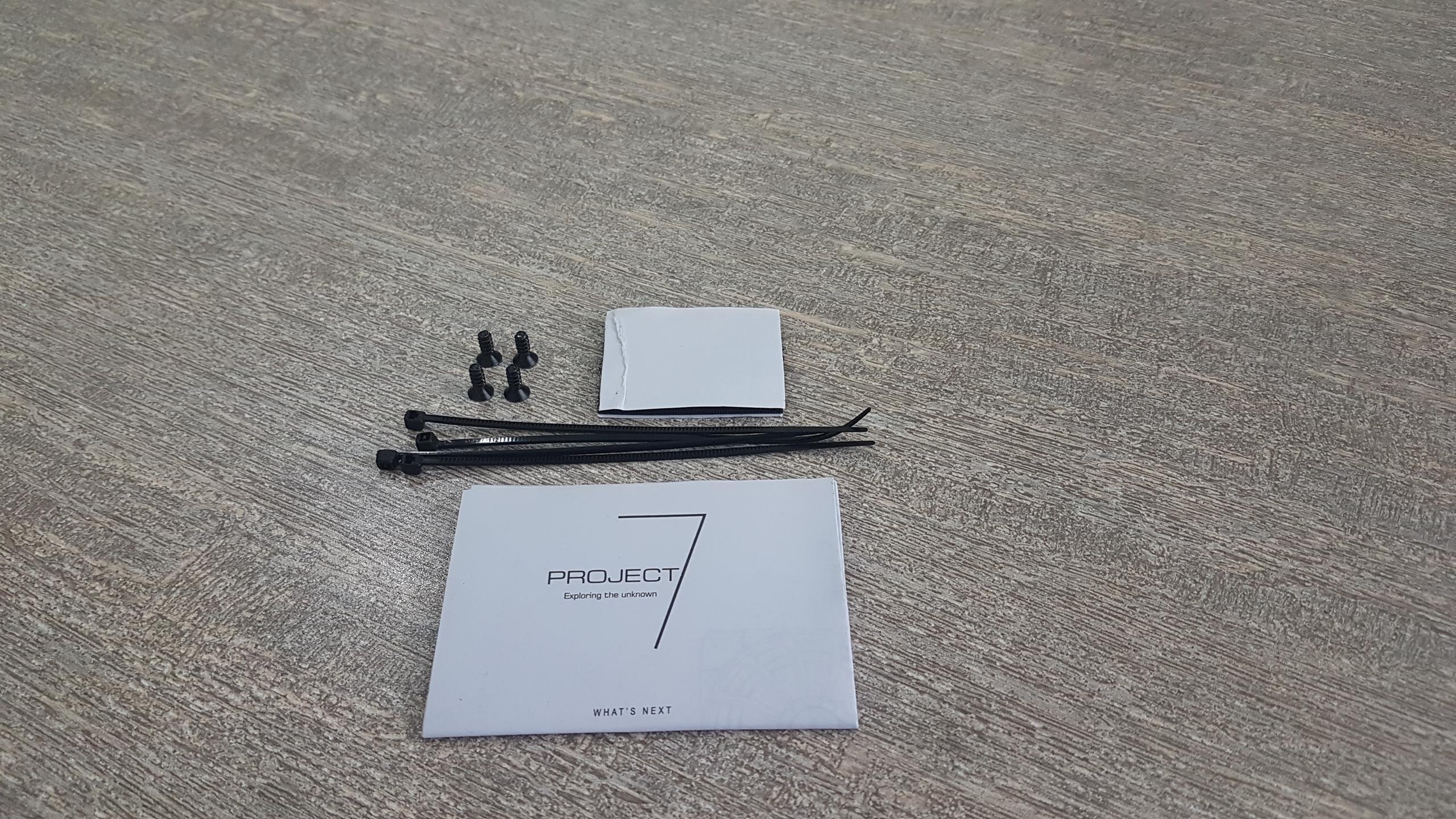 The P7-H1 is a controller hub, designed to integrate/sync all the RGB products from the Aerocool particularly from their Project 7 series of the products. This allows the user to sync all lighting effect on all of the Aerocool products at hand to create one heck of a stunning lighting show. Their Project 7 series chassis, Power Supplies, and Coolers can be integrated into this hub for this purpose. Aerocool has provided a software S1 for this hub which allows the users to control the lighting effects and monitor the fan speeds. Let’s take a closer look at the hub.

There are Aerocool brand name and logo embossed in the middle on the top side of the hub. The hub has a dimension of 88mm X 69mm X 17mm. The bottom side of the hub has a plain surface mounted with 4 screws. There are cutouts in a group of 2 at equal distance from the border. The provided Velcro strap is to be pasted between these cutouts. Three cables are coming out of the hub from its front side. These are 2-pin Molex/Peripheral connector, 9-pin USB 2.0 connector, and 4-pin PWM connector. There is a dip switch with three buttons labeled 123. There is a text On with a line next to it indicating the corresponding active hub. The P7-H1 has the functionality of connecting multiple hubs (up to 8) with each other. This switch will be used to activate the hub(s). Below picture will be helpful in determining the order of the switch in case more than 1 hubs are to be used. If you are using only one hub then leave it at its factory default position. Length of each cable is approximately 480mm without the connector. 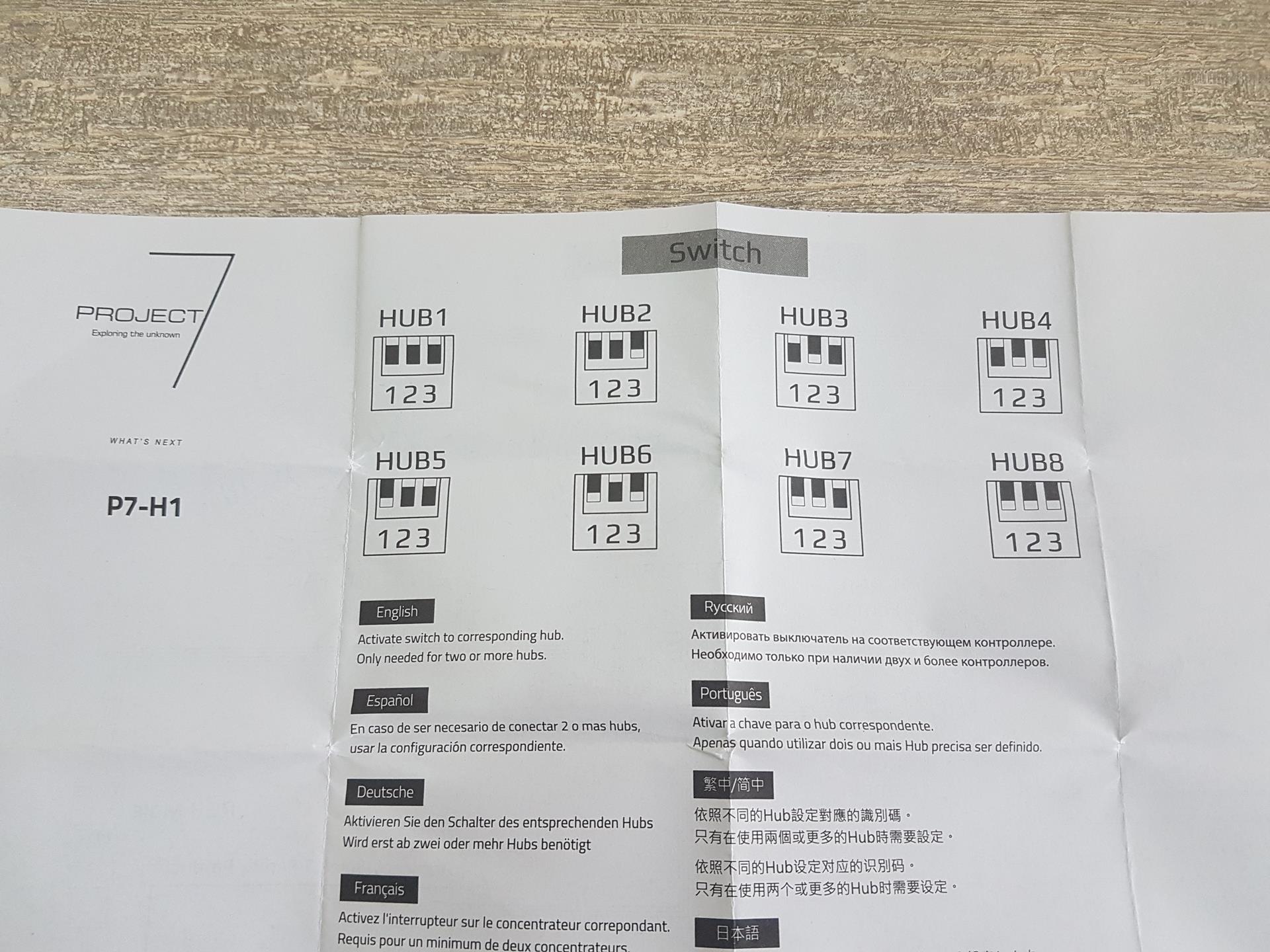 There are two 4-pin RGB LED ports on the right side of the hub. These are following the specification of 12V GRB in 5050 format. Hence, this hub is compatible with the majority of the RGB LED headers on the today’s motherboards. Total LED output on these two ports is 24 Watts. One can daisy chain the LED strips/Fans for connectivity with the hub which would allow using multiple RGB LED enabled devices on a single port but within 24 Watts output. There are three 4-pin headers for the fan on the backside of the hub and two on the left side of the hub. Fan output is up to 18 Watts. Please, note that you can’t control the speed of the fan(s) using the software S1 but can only monitor the RPM of the fan(s). Below diagram will show the connectivity options for understanding purpose. 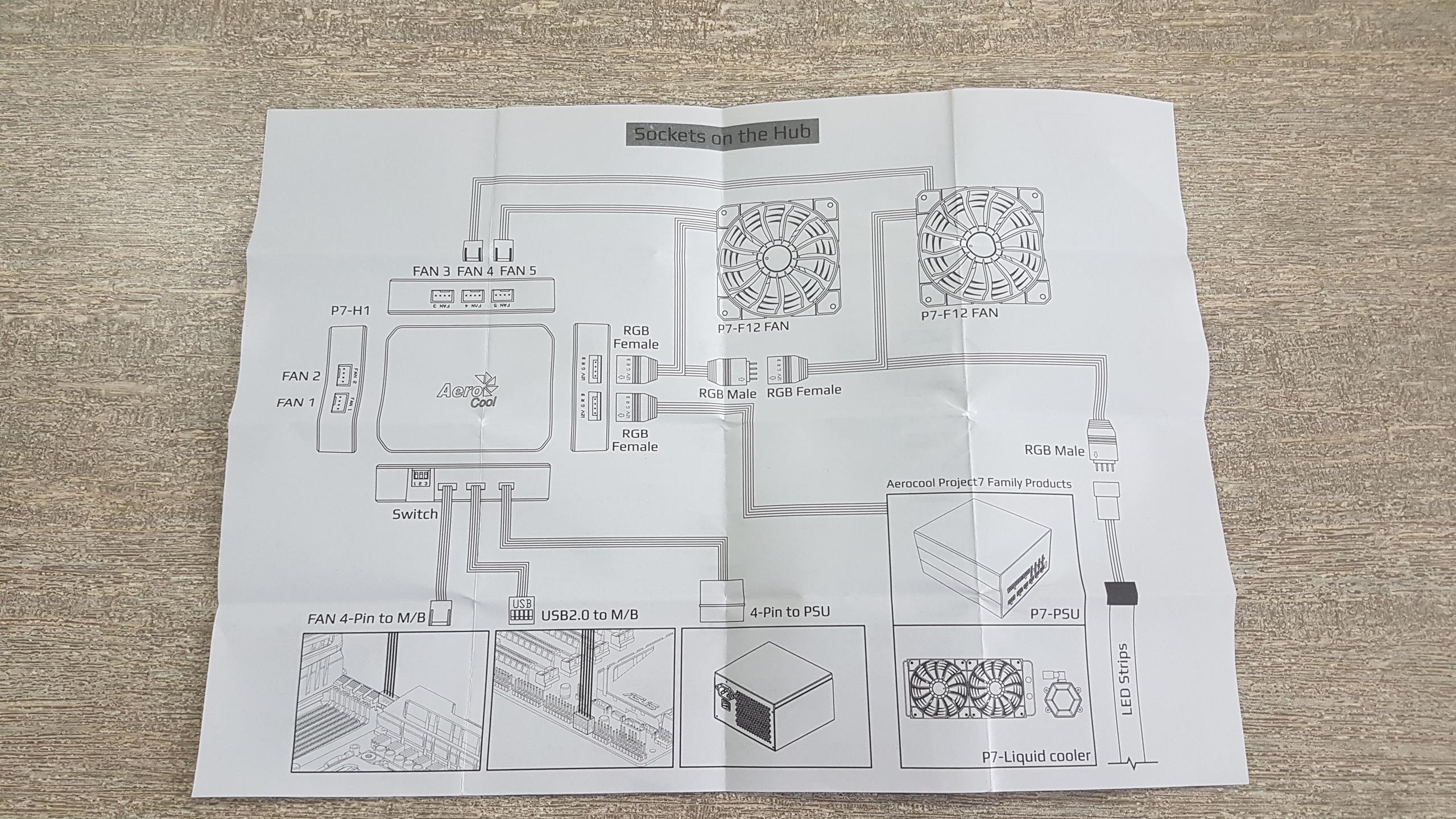 Aerocool has sent us their P7-L240 Liquid cooler which has two P7-F12 RGB fans in it. This gives us the opportunity to test the hub before testing the P7-L240 cooler. Each fan has two cables coming out of it. One is the 4-pin PWM connector cable to power the fan and the other is the RGB LED cable with two connectors. One connector is the extension one to connect one more RGB LED device, preferably another P7-F12 fan to daisy chain them. The second connector is the RGB LED header which would plug in the hub or directly on the motherboard’s RGB LED header like Asus Aura Sync header for example.

To test the Hub, we daisy chained both fans and connect one fan’s RGB LED header to the hub. PWM connectors of both fans were connected to the Fan 1 and Fan 2 ports respectively. Please, note that it is not mandatory to connect the PWM connectors to the hub to power up the fans. The USB 2.0 connector was attached to the Asus Rampage V Edition 10 USB 2.0 header and Molex connector was connected to the PSU. The software can be downloaded from the Aerocool’s website to control and monitor the LED lighting and fans’ speed. Software installation will not start unless the hub is connected to the motherboard and powered up. Here are few pictures of the connectivity of this hub with the motherboard.

Let’s take a look at the S1 software provided by the Aerocool to be used with the P7-H1 hub. The software has a simple and user-friendly interface and allows the user to customize the lighting effect using 16.8 Million colors. On the top panel, there are tabs with Hub 1, Hub 2 and so on written on them. The software will show the currently activated hub and its corresponding options. There is a Settings button on the top right side before the minimize and close buttons. It has only one option to update the software. There is LED Mode on the top left side with a drop-down box. The modes are:

Limited modes are available at the moment using the software. There are two more knob style buttons with the slider on them. One is to control the brightness of the light and the other is to control the speed of the light effect. The user will have to click on the Preview System button on the right side. This is strange implementation as the word Preview itself is confusing. There should be Apply button to make it more convenient for the user. One may take the word Preview in its literal meaning of just checking the corresponding effect without applying it whereas this button is actually acting like Apply button. On the bottom left side, there are five fan icons which light up in the blue to show the connected fan(s). In our case, the first two icons light up indicating that only two fans are connected at the moment. Click on each fan to check its speed in RPM. The software does not have any feature to control the speed of the fans, which would have been an added functionality. The user will have to rely on other methods of speed regulation like using motherboard’s BIOS to control and set the PWM fan curve or using some software for this purpose. There are two circles on the top right side indicating the color range that the user can change to control the lighting color. The outer circle is to control the color’s shade whereas the inner circle is to control and set the selected color. Alternatively, the user can use the R G B text boxes located beneath the circles by giving color numbers from o to 256 in each of the boxes. The user can also input the HTML color code in the text box below the RGB text boxes. Alternatively, there is a color pallet on the right side of the HTML code textbox which the user can use to click and select the color. The user can undo the last change as well. Finally, there is a Loop RGB option that can be toggled between on and off. By default it is off. Turn it on if you wish to color the cycles. Please, note that there is no Rainbow mode available indicating that the RGB LEDs are not addressable. The user can change the language of the software at the bottom right side. Help would take you to the web browser with a link to a youtube video demo of the P7-H1. The user can also sync all the connected hubs in the software.

The P7-H1 is an RGB LED Controller Hub, designed to integrate/sync all the RGB products from the Aerocool particularly from their Project 7 series of the products. This allows the user to sync all lighting effect on all of the Aerocool products at hand to create one heck of a stunning lighting show. Their Project 7 series chassis, Powe, Supplies, and Coolers can be integrated into this hub for this purpose. The hub has a dimension of 88mm X 69mm X 17mm. 2-pin Molex/Peripheral connector, 9-pin USB 2.0 connector, and 4-pin PWM connector cables are pre-installed on the hub. There is a dip switch with three buttons labeled 123. The user can connect multiple hubs (up to 8) with each other and this switch is used to activate the corresponding hub. Length of each cable is approximately 480mm without connector.

There are two 4-pin RGB LED ports on the hub. These are following the specifications of 12V GRB in 5050 format. Hence, this hub is compatible with majority of the RGB LED headers on the today’s motherboards. Total LED output on these two ports is 24 Watts. One can daisy chain the LED strips/Fans for connectivity with the hub which would allow to use multiple RGB LED enabled devices on a single port but within 24 Watts output. There are total 5 4-pin fan headers on this hub. Fan output is up to 18 Watts. Please, note that you can’t control the speed of the fan(s) using the software S1 but can only monitor the RPM of the fan(s). The only Con that I could think of this hub is the bulk of cables to deal with but then again tell me which RGB Controller Hub does not have that issue.

The software to be used with this hub has a simple and user friendly interface except that there is no Apply button to make the changes active and save them but there is a Preview System button which is located in the center of Color Range circle which is rather confusing. The Preview System button has the functionality of Apply button. The hub is rated at €19.90 / $24.99 at the time of the review making this hub a better value product.

We are thankful to Aerocool for giving us the opportunity to review their P7-H1. 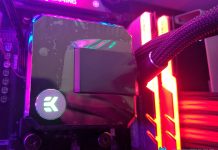