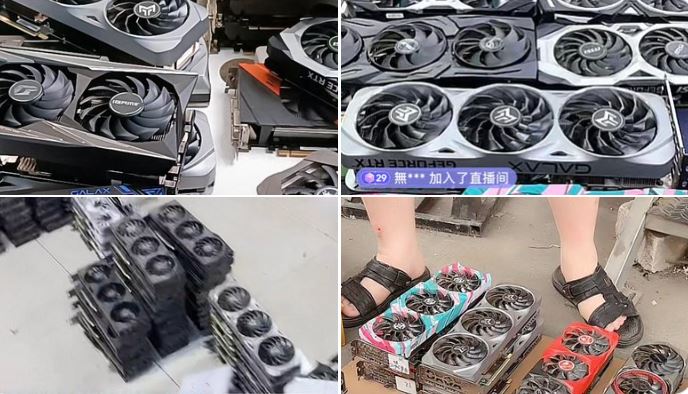 The cryptocurrency mining crash also means that there will be a lot of mined GPUs in the market sold by the miners. This is the case as the market has started flooding with used GPUs. In China, you can get a used Nvidia GeForce RTX 3060 Ti for about $300 to $350 in auctions on live streams.

Chinese miners and South Asian ecafes now dismantling their mining rigs and putting cards up for auction on livestreams.

Though, there are various misconceptions regarding mined graphics cards, the biggest of which is their short life. Usually, mined cards are undervolted and kept under ideal conditions by providing air conditioning and proper cooling. Therefore the temperatures of the GPUs are usually maintained.

On the other side, in gaming, we use graphics cards on the max load while gaming or sometimes even at high volts while Overclocking to squeeze a few more FPS out of it, and there might not even be proper cooling in closed cases.

However, it should be noted that whenever you buy a used GPU, whether it is mined or gamed on, check it thoroughly. This includes checking the condition, and temperatures, which can be done using various benchmarks. You should also run multiple games for artifacts or request the seller provide gameplay videos before finalizing the purchase. However, this might not be the case if you buy graphics cards in bulk quantity.

While the GPUs might be nearing MSRPs, used cards aren’t a bad option if checked properly. I would instead buy a used mining card that was undervolted and running in an open case & cool environment Vs. from a gamer that had it overclocked to the max with extra voltage & in a case with little airflow.

But the decision is up to you decide to whether to buy a GPU right now as the latest offerings from both Nvidia and AMD are right around the corner namely GeForce RTX 40 Series and Radeon RX 7000 Series, respectively and they are expected to sell at their MSRPs.

Do you guys prefer to buy new cards, or are comfortable with a used card? Let us know in the comments.