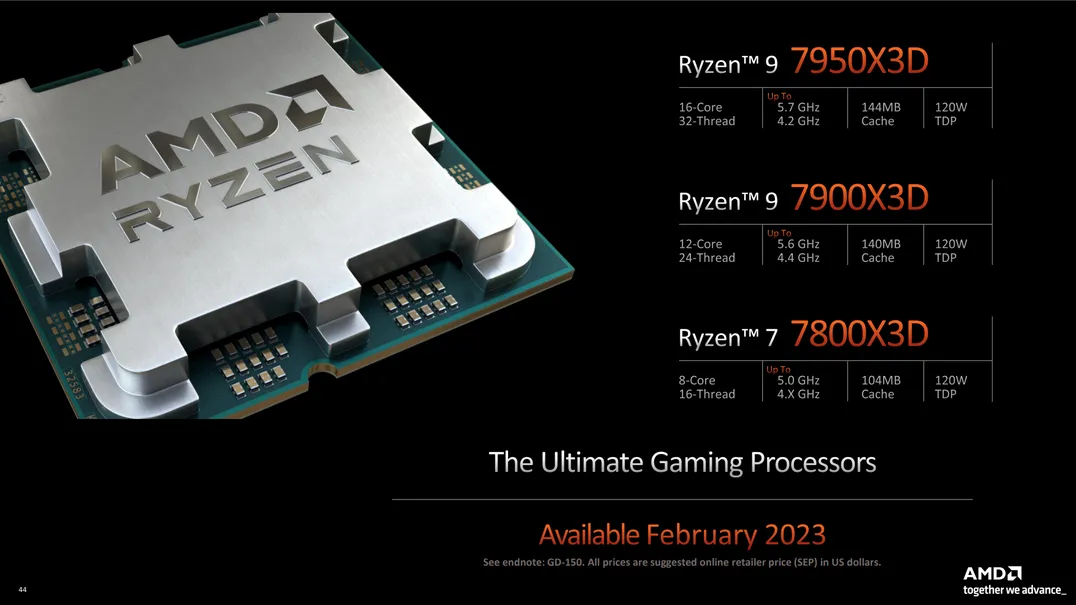 The new Ryzen 7000 3D V-Cache lineup should be as impressive as its predecessor when AMD first introduced the Ryzen 5800X3D. The Ryzen 5800X3D was AMD’s response to Intel’s 12th generation and beat the Core i9-12900k in both price and performance. Intel has since then regained its performance crown with the launch of the Core i9-13900k, but not for long.

Last year the 3D V-Cache technology was only limited to the Ryzen 7 chip, mainly the 5800X3D, but this year AMD is focusing on all its high-end Ryzen 7000 offerings, and it would be interesting to see the performance improvement gain in productivity, rendering, and gaming.

AMD’s best chip, the Ryzen 7950X3D, will come with 16 cores and 32 threads, running at 120-watt TDP. Furthermore, the chip will also feature a massive 144MB of L2 and L3 cache. AMD is also calling the new Ryzen 7950X3D their “ultimate processor for gamers and creators,” Simultaneously, the chip could perform up to 24% better than its rival, the Core i9 13900k, in games as per red camp.

There is no information on the Ryzen 7000 3D V-Cache lineup pricing. However, Intel did price the Core i9 13900k $100 below the AMD Ryzen 7950X. So we won’t be surprised if AMD decides to do the same this year. Whatever the case, if AMD wants to win, it has to go with aggressive pricing to offer something better than the competition.

What are your thoughts on AMD’s much-awaited Ryzen 7000 3D V-Cache lineup this year?