We all are waiting for the premiere of Intel Arc graphics cards from the Alchemist series, coming to face graphics cards from Nvidia and AMD. The manufacturer, however, does not intend to stop there and currently working on the next generations – new cards may appear sooner than we suspect.

Intel Arc graphics cards are designed with gamers in mind, competing with the Nvidia GeForce and AMD Radeon models. The first generation of cards is to debut at the beginning of next year – the plans include both versions for desktop computers, as well as systems for gaming laptops.

The Intel Arc models will be based on the Xe HPG microarchitecture, which has been optimized for graphics cards for gaming and content creation. The design combines the key features of the Xe LP, Xe HP and Xe HPC microarchitecture. Importantly, TSMC will be responsible for the production of the chips (the new TSMC N6 lithography will be used here).

The first to appear on the market are the Alchemist family of graphics chips (previously known as DG2). The units will be fully compatible with the DirectX 12 Ultimate interface , and will offer support for DirectX Raytracing (DXR) and Vulkan Ray Tracing technologies. Software optimization is to be a very important issue (the blue ones declare close cooperation with programmers).

We will have to wait for thorough performance tests, but recently Intel boasted about the capabilities of the pre-production version of one of the Alchemist systems which you can see below:

Intel will release a new generation of graphics cards every year?

During the announcement of the Alchemist models, the manufacturer also revealed the next generations of Graphics cards roadmap: Battlemage, Celestial and Druid. While the details of the release date have not been disclosed here, but some clues were given to us by the programmer responsible for the graphics drivers. 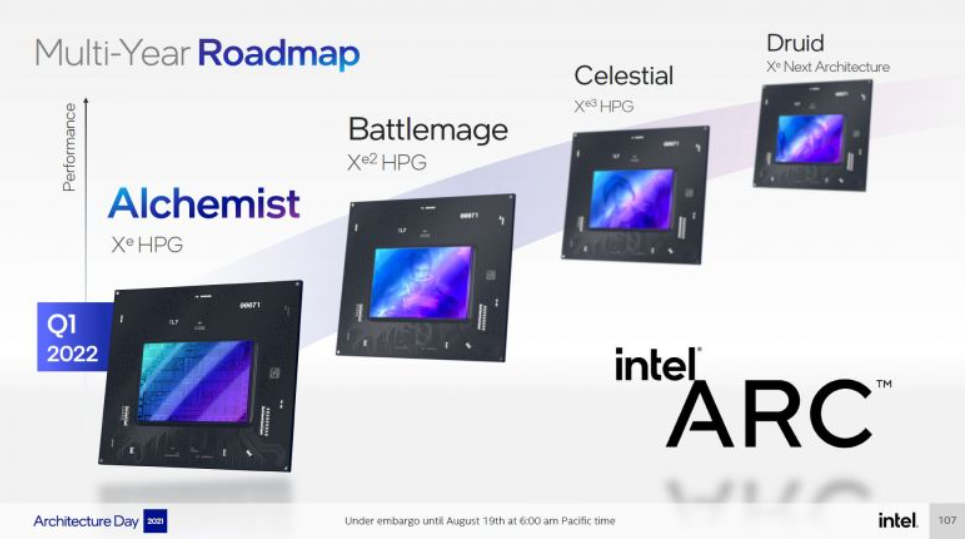 Bryce_GfxDriverGuru commented on the news of one of the fans about the hypothetical launch of the GeForce RTX 6090 SUPER in 2025. According to the developer, if everything goes as planned, Intel Arc models from the Druid generation should already be available by this time.

If all goes well, that could be when Intel ARC 'Druid' cards come out… game on 🎮😉

Bryce’s message should be treated with a pinch of salt. However, it could suggest that new generations of Intel Arc cards will appear every year – Alchemist in 2022, Battlemage in 2023, Celestial in 2024, and Druid in 2025. The manufacturer would then impose a faster pace than the competition (new generations of Nvidia and AMD graphics cards appear every two years).

Will this really happen? We will probably find out about it in some time, when the manufacturer will officially comment on the date of the premiere of the next graphics cards.