PlayStation is well known for its large variety of games. Apart from a healthy offering of Western games, the platform is also home to many Japanese games. While Xbox doesn’t have much influence in the Asian regions, PlayStation has used its influence to produce quality games for its consoles.

PlayStation is now looking to expand further into the Chinese gaming market. While China has a popular gaming culture, Chinese games have never been a huge part of console gaming. That could soon be changing if this new report from Zuby_Tech is anything to go by. Zuby_Tech is an industry insider who has previously reported on updates like PS VR2 patents.

Zuby_Tech has tweeted about several new PlayStation job listings that have popped up. As highlighted by the tweet, the position aims to support Chinese games development. 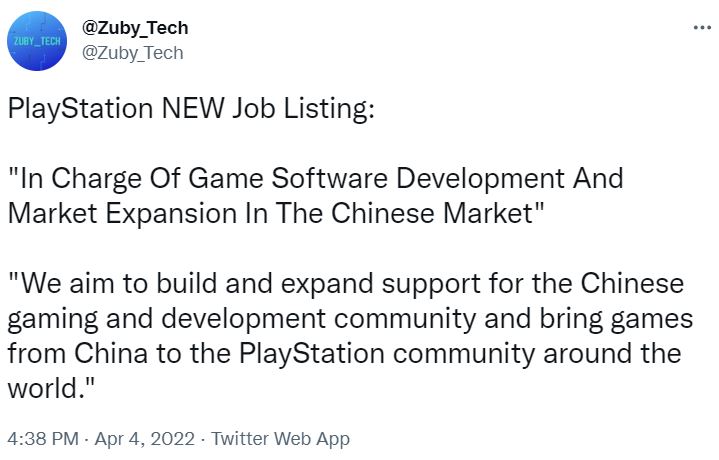 The listing further elaborates that PlayStation is looking to support local marketing and sales in Shanghai. It also states that the group has already recruited many people but is looking to grow the team further.

This is not the first time PlayStation has shown interest in supporting the Chinese market. An old PlayStation program called the China Hero Project aimed to do just that. At its heart, the project intended to equip indie developers in China with the budget and workforce required to bring their dream projects to life.

The highly anticipated game, Lost Soul Aside benefitted greatly from the project as creator Bin Yang was able to put together a team for his dream project. The game is perhaps the highlight of this cooperation and serves to highlight the talent in the Chinese video game market. Lost Soul Aside got an extended demo showcase last year, and the game is looking better than ever.

PlayStation now intends to grow even stronger in the Asian market. They already have a stellar reputation in the Japanese region and could be moving towards doing the same in China. Furthermore, this investment could prove to be a valuable asset for Sony against the various acquisitions from Microsoft. Projects like these will help bring recognition to hidden talent in the country, and one can only hope PlayStation has similar plans for other unexplored regions throughout the world.