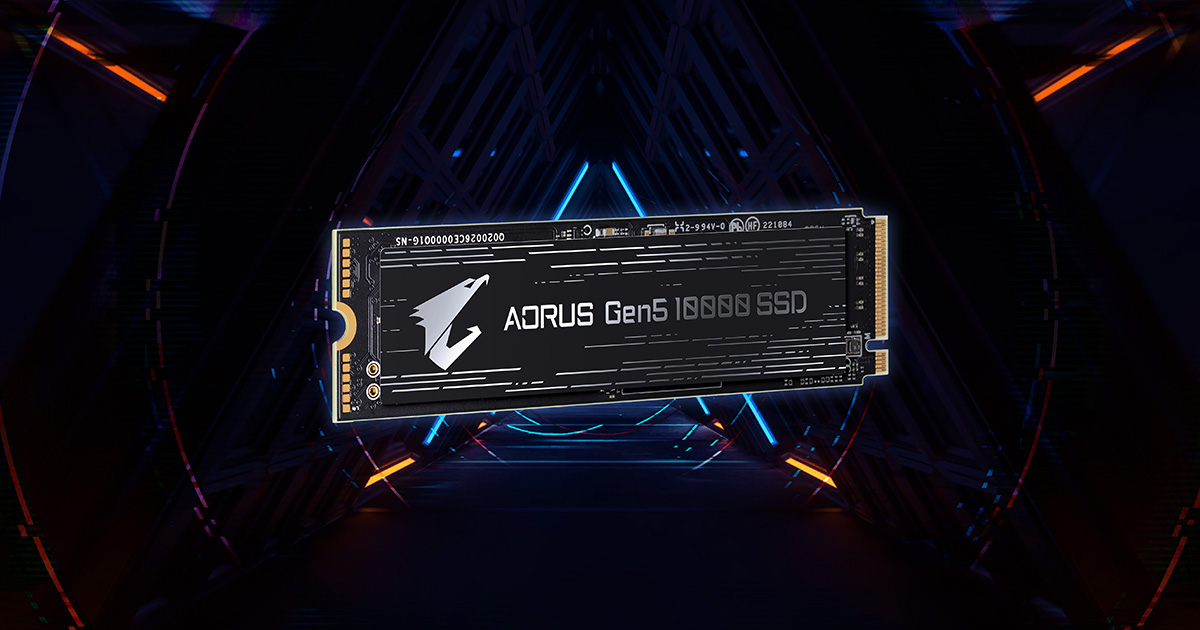 Home News GIGABYTE Announces AORUS 10000 PCIe 5.0 SSD With 10GB/s Read Speed
[Press-Release] Gigabyte announces the latest AORUS 10000 GenPCIe(R) 5.0 SSD; as its name suggests is a new generation NVMe SSD with a PCI-Express 5.0 interface, so its strong point will be speed.

GIGABYTE gave us proof of this during its social announcement, as the company showed off its 1TB capacity drive reaching sequential read speeds of 12,453.90 MB/s in CrystalDiskMark benchmarking software. When it comes to writing, it is not far behind, reaching 10,074.50 MB/s.

These speeds result from a combination of the PCI-Express 5.0 interface, a Phison PS5026-E26 8-channel controller, 200-layer 3D TLC NAND Flash memory chips, and the backing of an LPDDR4 cache.

In context to this performance, these speeds are 77% faster than its predecessor, the AORUS 7000 with PCI-Express 4.0 interface.

“With the support of PCIe 5.0 interface on new generation motherboards, bandwidth and transfer performance are raised to the next level.

Alongside the performance tests, the company also provided a picture of what the SSD looks like, and against all odds, its cooling system is pretty humble. Although it must be remembered that these SSDs may have incompatibilities with current motherboards since they measure 25 mm wide compared to the current 22 mm. Though, the company does not take advantage of this extra space to provide cooling benefits.

Gigabyte indicates that units ranging from 1 TB to 4 TB will be launched. The truth is that it is planned that the first units to be launched will be 4 TB, and then the rest will arrive.

Something interesting is that this storage unit will arrive without a heatsink, which will have to be purchased separately, or we can use the one on the motherboard itself. Gigabyte notes that they offer their exclusive SSD Tool Box with these drives. This allows the user to see the drive’s status in real-time, being able to control the capacity and temperature of the drive.

Gigabyte indicates that these new AORUS Gen5 10000 SSD drives are fully compatible with the company’s motherboards with the Z690 chipset. Remember that this chipset is for Intel Alder Lake processors, the first to support PCIe 5.0.

What we do not know at the moment is the price of these new storage units based on PCIe 5.0. Given the price at which PCIe 4.0 SSDs were launched, we can expect a cost of over USD 1,000 for a 4TB drive.