CCP Games, the creators of EVE Online at EVE Fanfest 2022, announced that they are working on a new Sci-Fi-themed tactical shooter set in the New Elden universe.

However, this is not the first time CCP games is trying to deliver a Sci-Fi FPS shooter title as Dust 514, the company’s first EVE Online-based shooter, was released as a PlayStation 3 exclusive for free back in 2013.

Unfortunately, it did not receive a warm welcome and was shut down three years later. Dust 514’s terrible shooting, driving mechanics, and grindy free-to-play economy took all the fun out of the game, according to the community.

The second attempt by CCP Games was called Project Nova, which didn’t even make it to the launch stage as the game did not meet certain expectations, and developers were not satisfied with project Nova. In 2020, the game was finally terminated.

“Now, after taking all this research and feedback into account, we see that the gameplay experience in its current form does not live up to our original vision and would not achieve our ambitious goals for this project” -CCP Games

But, CCP games have not given up yet, and they are looking to explore the capabilities of Unreal Engine 5 in the upcoming Tactical FPS Sci-Fi-based universe title, as per the recent job listing. 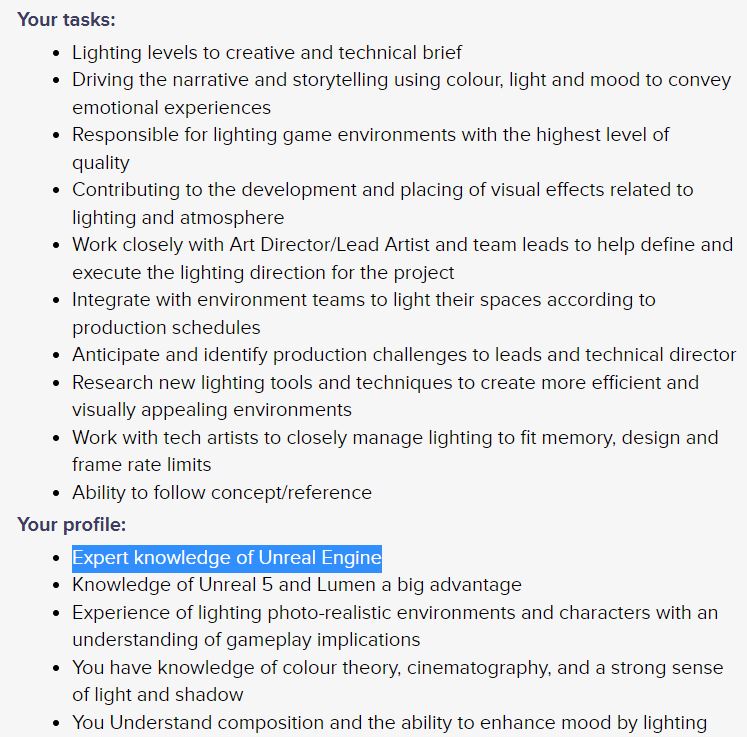 Unreal Engine 5 is slowly becoming the engine of choice for many developers, especially nowadays when there is proper hardware to support such graphically intense games. We previously reported that over 30 games are under development using unreal engine 5.

Unreal Engine 5 strengths can work wonders for the upcoming CCP games title as it can capture the details of the universe very preciously. It will be fascinating to see what CCP games can accomplish with Unreal Engine 5 and how they will address past product challenges.

Furthermore, it is unknown whether the future title will be a sequel to the original Dust 514 or occur in the same universe as Dust 514, also featured Elden Universe.

The job description frequently mentions lighting and the surroundings in great detail, indicating that it is likely one of their top objectives. While we all know that graphics are essential in games, especially those focused on science fiction, the immersive experience keeps players hooked.

However, there are still a lot of unanswered questions; CCP Games needs to address the core issues that caused the first two titles to be poorly received or fail to launch.

Nonetheless, we hope CCP games finally hit their mark with the upcoming title and truly surprise us all with a highly polished and fun game.

What are your thoughts? Have you ever played an EVE title? Do you think CCP games can finally hit their mark with the coming title?

Related News: Valkyrie Entertainment Reportedly Working On Guns Up! 2 According To Job Listing