Home News New Job Listing Hints At Multiplayer For Cyberpunk 2077 Or The Witcher...

Around three years before the launch of Cyberpunk 2077, it was speculated that the game would come with a multiplayer mode. That made a lot of sense due to the immense success of GTA Online. However, the game launched in 2020 in a state of chaos and without any form of multiplayer version. Although recent updates have made the experience better, the multiplayer mode is still nowhere to be seen.

In an Investor call Q&A last year, CD Projekt RED announced that they would bring multiplayer modes to New The Witcher 3 and Cyberpunk 2077. However, they did not confirm when they did say that they’ll be launched gradually.

We have come a long way since then. CDPR also revealed that the multiplayer engine will shift from the RED engine used in Cyberpunk 2077 to the Unreal Engine, thanks to their latest partnership with Epic Games. Today, we have a fresh new job listing from CD Projekt RED hiring for a ‘Multiplayer Programmer’ hinting that a multiplayer mode for either The next-Gen Witcher 3 or CyberPunk 2077 might still be in work: 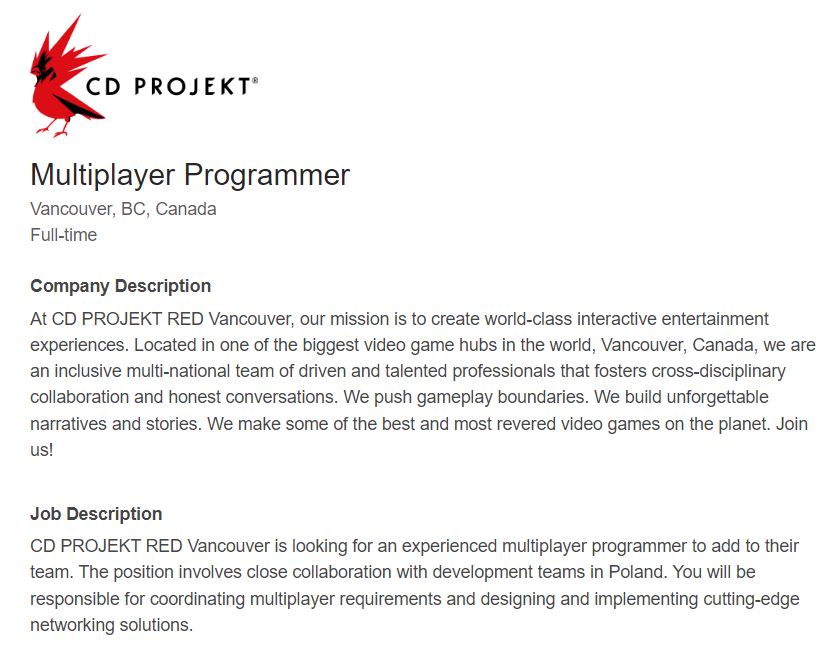 According to us, the multiplayer is more likely to be of Cyberpunk rather than the Witcher because we know that some Witcher projects are already in development; The Witcher 3 Next-Gen update and the New Witcher series game. Or the entire thing could be an entirely new game and nothing of Witcher or Cyberpunk 2077.

Although the job posting has got our hopes up for a Cyberpunk 2077 multiplayer, we might have to wait a long time for that. CDPR also announced that the next expansion planned for Cyberpunk 2077 will be in 2023. They will work to improve the current state of the game. So, even if there is a Cyberpunk multiplayer version in the works, it is at least a few years away. We will surely keep an eye out for any further hints, so stay tuned for more information.