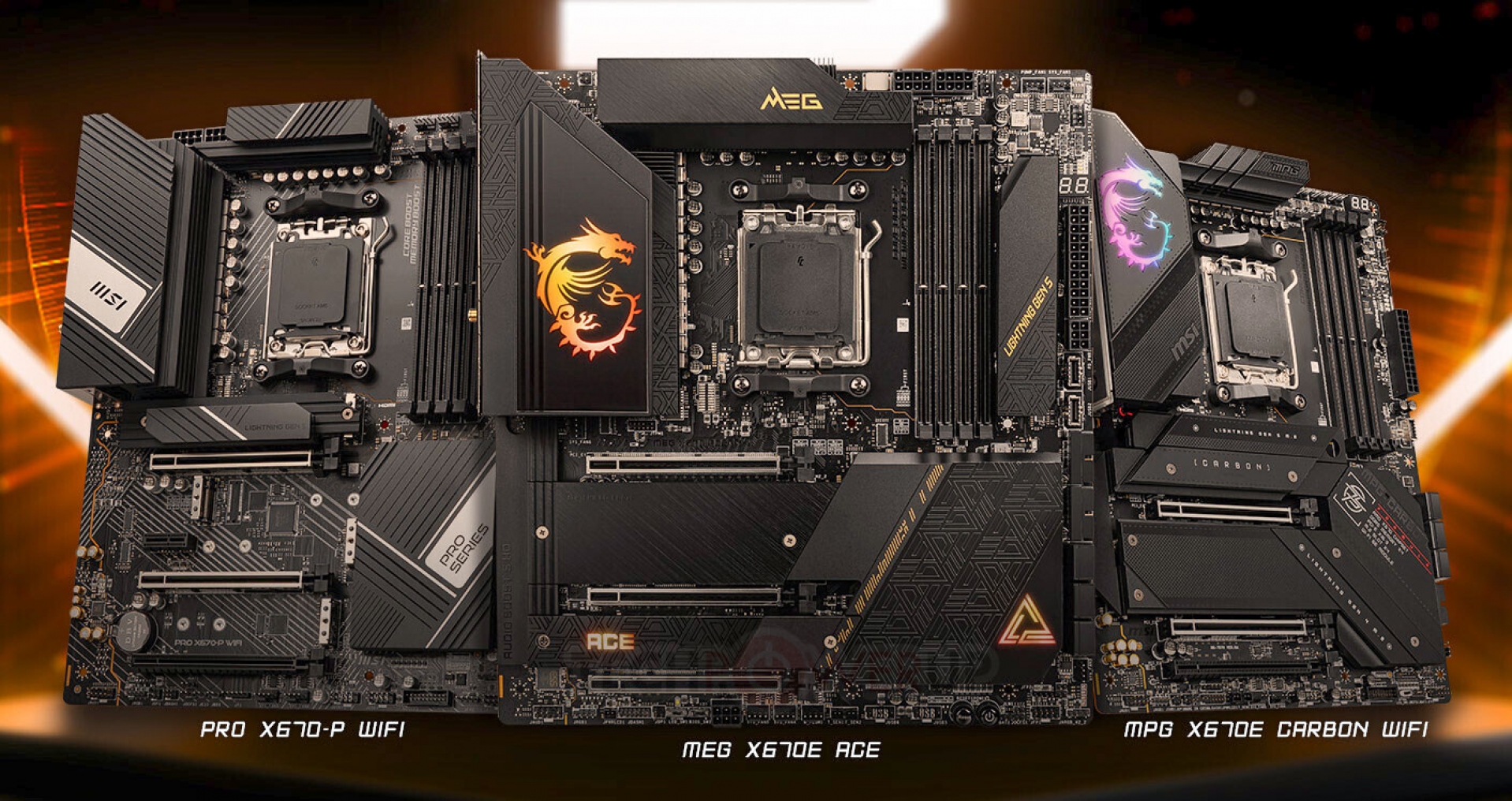 AMD’s upcoming Ryzen 7000 series is just around the corner, and MSI officially confirmed the prices for their upcoming lineup of motherboards based on the AM5 platform. X670 and X670E motherboard prices have doubled since last year, making them more expensive than ever.

The prices for the four main X670 and X670E models have been updated on MSI’s official website; 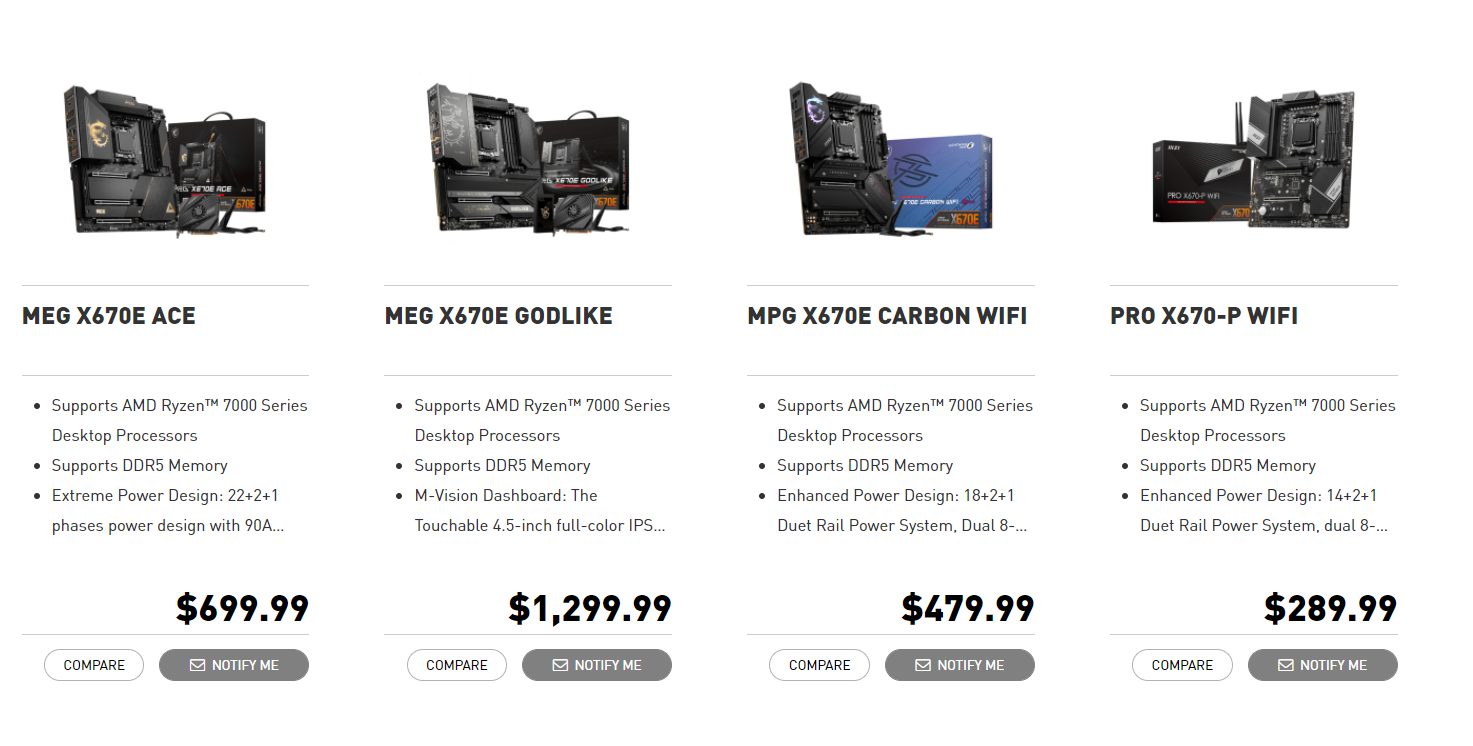 With its diverse pricing, the X670 & X670 series has still taken quite a leap over the last gen’s AM4 lineup. In the past year, the X570 motherboard lineup started retailing at around $200, going up to $700 for the flagship X570 MEG GODLIKE.

But this year, even for the cheapest AM5‘s X670 model, the price has been bumped up 50% over the last year. The MSI X570S Carbon Wi-Fi and MEG X570S ACE have both seen a whopping 80% and 95% increase in prices, respectively. The price difference for the flagship GODLIKE motherboards is not narrow either, with around a $600 increase in the MSRP.

While comparing AM5 prices to AM4 prices from last year, you can see that the price difference is quite significant.

Following AMD’s AM5 motherboard event, where all major AMD motherboard partners showcased their upcoming products, we already knew what to expect regarding product specifications.

The cheapest motherboard on the list, the X670-P Wi-Fi, is designed mainly for enterprise and gaming use. Hence, it also lacks behind others in terms of its aesthetics.

It comes with the 14+2 Phases Duel Rail Power System and the Dual 8-Pin CPU power connector. Carrying on the PRO’s series’ strengths, this motherboard supports Wi-Fi 6E and 2.5G LAN and comes with an M.2 PCIe 5.0 x4 slot.

The board features MSI’s signature RGB lighting and a carbon black aesthetic and offers some of the beefiest specs you’ll find on a high-end motherboard.

For starters, it has a built-in Wi-Fi 6E and Bluetooth 5.2 Connectivity. The heatsinks and armor on this have been slightly enlarged for better cooling and decent overclock. Still not the best on the list, but it does have support for PCIe GEN5 for GPU and storage. However, of the 4 M.2 slots, this motherboard has, only 2 of them are Gen5, and the rest are Gen4.

Coming in at a whopping $1300 MSRP, it is safe to say that you might expect a lot from MSI MEG X670E GODLIKE motherboard. This is the flagship and most premium motherboard MSI offers for the upcoming AM5 lineup. The GODLIKE series is always known for its classy and superior aesthetic. Well, things are even better this time around.

The motherboard uses a 24 ATX power, alongside a dual 8 and a dual 6 pin power, one of which is used to supply 60W for the motherboard’s USB Power Delivery. With an enormous upgrade over the last gen’s 14 Phase design, the GODLIKE comes with a 24+2+1 Phase CPU VRM design this time. It has three PCIe Gen 5 slots, a single Gen 5 storage M.2 slot, and three other Gen 4 slots.

While there is no doubt that MSI didn’t feel generous this time, it is safe to say that even with the hefty price of $1299, overclockers and enthusiasts are in for a treat.