When Ubisoft and Obsidian Entertainment released South Park: The Stick of Truth in 2014 we faced an unusual fact, a video game on a licensed TV show that was really well executed. The direct collaboration of Trey Parker and Matt Stone, creators of South Park, undoubtedly was a determining factor to transform that RPG into a great triumph of criticism and sales. And today we will be writing on South Park The Fractured But Whole Review.

Three years later, and without Obsidian in charge of development, Ubisoft released the direct sequel to the first game South Park: The Fractured But Whole. This is a sequel that plays mostly safe, but innovative in some crucial departments. As a result, this is a South Park game that feels authentic again, almost like an extra long episode of the TV series.

Once again we interpret the New Boy, whose flatulence hides special powers that defy time and space. At the beginning of the game we witnessed the final battles for control of the stick in the fantasy world that we left in The Stick of Truth, but quickly the facts mutate when Eric Cartman decides that it is better to play superheroes. As usual, the little psychopath has his own goals in mind: to rescue a lost cat, to collect the $ 100 reward and, with the help of that money, to launch a multimillion-dollar superhero franchise around his Coon character.

South park the fractured but whole review, then, gives rise to a whole new adventure that parodies the superhero movies and ridicules that sometimes come to us to build shared cinematic universes.The game structure takes our character to play an ambivalent role in a “civil war” that erupts among the boys when they cannot agree on the structure of their franchise.

Cartman leads “Coon and Friends”, while Timmy – in his hilarious role of Dr. Timothy – leads “Freedom Pals”. With both sides in contention, our role will be to investigate the mysterious disappearance of cats in South Park and unravel the deepest secrets of this mystery.

south park the fractured but whole review benefits from this shift in the subject, but at the same time it feels something derivative in other departments. For example, the scanning structure and the present scenarios do not vary much with respect to The Stick of Truth. Back then, it was wonderful to have the option of exploring a virtual version of South Park, but the peaceful mountain town remains largely unchanged in this sequel.

The game reflects some of the changes that have taken place in recent South Park seasons, such as gentrification and subsequent abandonment of Kenny’s home in the SoDoSoPa district, or the presence of “tasteful” Shi Tpa Town. Otherwise, the structure of South Park is mostly identical to that seen in the first game.

Other narrative elements of the last seasons were also integrated into the game to give it a little more freshness. Such as the appearance of PC Principal and other more recent characters, or the growing interest of the inhabitants of South Park for subjects related to Social Justice, exemplified in an excellent way thanks to the appearance of a bathroom for Cissies in the town square.

south park the fractured but whole review also does a very good job at giving us some more protagonists, who usually do not occupy the central plots of the series. Scott Malkinson – AKA: Captain Diabetes – is the star of a very funny sequence in a nightclub, Tweek and Craig – AKA: Wonder Tweek and Super Craig – have a special arc that explores their homosexual relationship (result of the excellent chapter of the season 19, Tweek X Craig), while Token Black -Tupperware- and Wendy Testaberger -Call Girl- also have very interesting and fun roles.

The rest of the guys also have a stake in the game, but Kenny, Stan and Kyle didn’t steal the screen and leave room for the rest of the characters to shine. A different case is the always problematic Eric Cartman (The Coon), but we will avoid spoilers in this review, because we don’t want to ruin the surprises that surround his character in the last segment of the game.

From a structural point of view, South Park: The Fractured But Whole presents a simplified system of character progression, counterpoint to a more complex and interesting combat system than the first game.

As for the progression, things are very simple, as the game progresses we are going to unlock new powers (to the point that at the end of the adventure we can count on all the available skills) and different slots to equip talismans that increase the strength of our character and give him unique advantages. The rest of the changes and improvements available are merely cosmetic, and the system of progression hides no more complex element than outlined here.

The combat system, on the other hand, is much more interesting. Instead of using an active real-time system as in the first game, South Park: The Fractured But Whole features turn-based combat on a predetermined grid. The different abilities of our character and up to three companion characters, deny or influence different squares of said grid, so that positioning and action decisions become really significant elements. The combats begin mostly simple, linear fights against sixth graders. 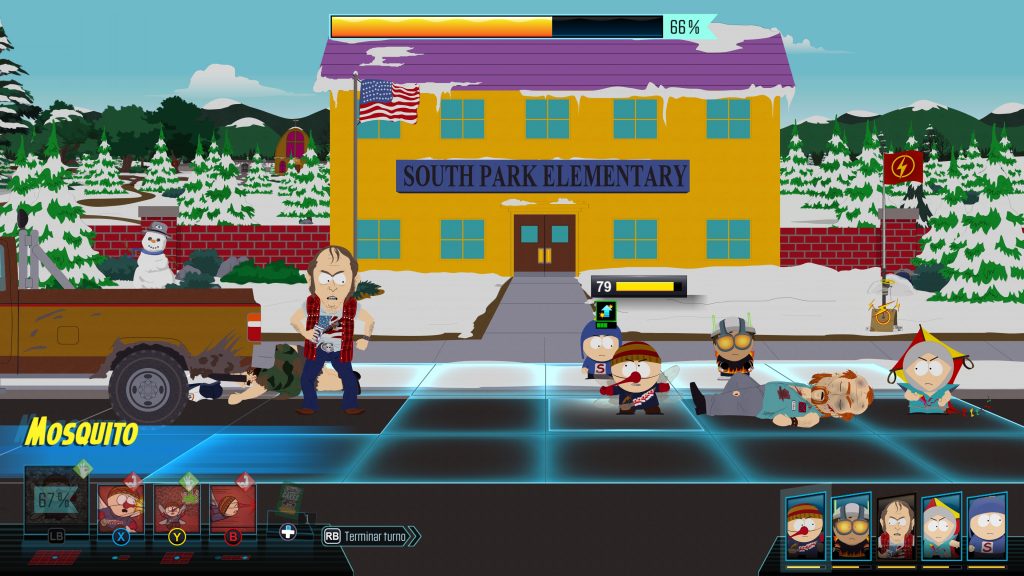 But as the game progresses they become more complex, with the appearance of new enemies with special abilities and new unique rules to certain fights. For example, a fight against Mr. Stoch puts us in trouble with his powerful punishing ability denying huge areas of the battle grid, while the fight against General Disorder forces us to try to focus the most attacks on one private enemy while evading a rain of burning lava (in fact they were red blocks of Lego)

The combat system allows us to also access each character’s unique abilities and certain special attacks. Unique abilities are achieved by completely filling the limit bar that is common to the actions of all our heroes. In this aspect, The Fractured But Whole fights involve a system of Quick Time Events, if we manage to press a certain sequence of buttons when attacking we will do more damage.

The special abilities are powerful and fun to watch, but their animations can not be skipped and after seeing them more than a dozen times they become less interesting. Something similar happens with the invocations, which also own lengthy animations. Although I must admit that it’s hard to get bored watching Gerald Blofovsky’s animation and his hilarious tribute to the excellent chapter of Season 12, Major Boobage.

Finally, the last great playable element in The Fractured But Whole is the system of exploration. As we have already mentioned, the central elements of the exploration present in the game are not different from what was seen in the first game, to the point that once again we can explore the different scenarios using different abilities of our character related to flatulence.

In this case, the biggest news is that we will have to use our allies to overcome certain obstacles. For example, The Human Kite (Kyle) was able to help us reach high places, while Toolshed (Stan) can use his air gun and the back of our character to clear environmental obstacles, such as the aforementioned lava. Other powers are unique to our character, such as the ability to stop, rewind or advance time courtesy of his flatulence.

As for the graphic aspect, as seen in the first game, The Fractured But Whole looks and feels like an episode of the TV series, the animations, the details and the idiosyncrasy of each of the characters are absolutely authentic. While it is necessary to mention that this second game has some added effects to the environment and the skills of our heroes that make it a little more demanding than its predecessor in terms of hardware.

In the sound aspect, the game returns us to deliver the original package with all luxuries of details. Unfortunately, there are some audio synchronization issues in Latin American Spanish dubbing and other languages apart from English. Some lines of dialogue have been mixed (for example, Butters reads a line that was for Kyle), but they are minor issues facing an excellent dubbing.

We are also forced to mention the presence of some rather annoying bugs. Some are merely graphic bugs, such as characters that take time to load. But others are logical bugs of fighting that can have negative consequences. On more than one occasion I found that two enemies happened to occupy the same square, which makes it impossible to damage the enemy that is “behind” the original occupant of that square.

In another case, one of my characters was transformed into a sort of “ghost” that was ignored by the enemies and suffered no harm from their attacks (and no, it was not Kenny!). 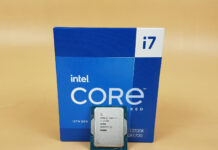 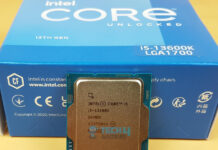 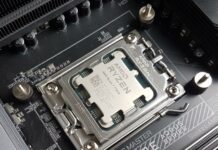 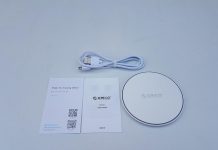 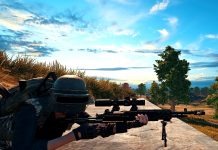 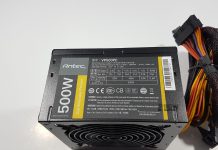 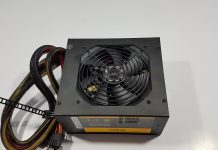 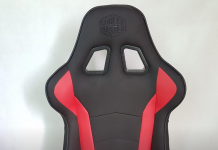 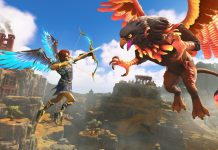 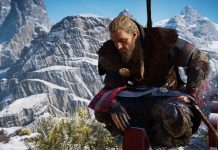