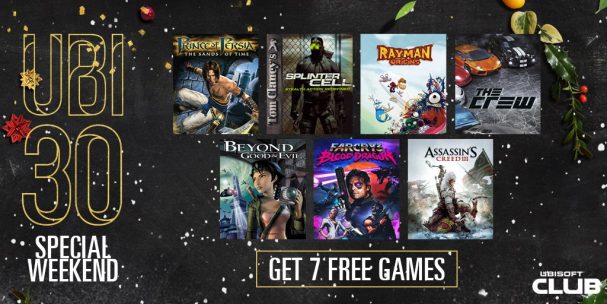 As some of you may know that from June to December this year, Ubisoft has been giving away a game per month to celebrate its 30th anniversary. However, some users were not aware of this promotion, so from today until December 18, all PC users can redeem the full pack of Prince of Persia: The Sands of Time, Splinter Cell, Rayman Origins, the Crew, Beyond Good & Evil, Far Cry: Blood Dragon and Assassin’s Creed 3 for free via UPlay or from UBI30 page.

Ubisoft offers a Free Pack of Seven Titles until December 18

This is the last chance to add the seven titles to Uplay library. In other free game news, Xbox users can get their hands on Lost Oddyssey for free for the time being.

“To celebrate the 30th Anniversary of Ubisoft, Ubisoft Club has given players the opportunity to discover and rediscover the classics of Ubisoft for free. Once a month, from June to December, Ubisoft Club has presented a set of digital PC Ubisoft acclaimed for its quality, innovation and creativity.

To thank the players for 30 years of play, Ubisoft Club is preparing a special weekend as part of their 30 Days of Gifts: the best opportunity for fans and players to get free the seven digital classic PC Ubisoft offered to throughout the year. “