As per Major Nelson’s blog, Microsoft has announced a great deal for its customers who owns Xbox One or Xbox 360. Offering a special discounts in each games, especially on Tomb Raider: Definitive Edition, DLC for Battlefield 4, Deus Ex: Human Revolution, Spec Ops: The Line and many more. The offer will available for customers from 20th of this month.

Here are some games of Xbox One with their % of discount:

And please keep in your minds that the prices may vary for each region. 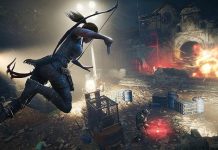