Finally, after being rumored for a long time, the famous western action-adventure, Red Dead Redemption is all set for release on the Xbox One through Backward Compatibility support.

Red Dead Redemption gets Backward Compatible for Xbox One, Coming This Friday

Players can enjoy the game on Xbox One no matter which ever version of the game they own, the Undead Nightmare or Game of the Year Edition. While the game will be available for purchase on the Xbox Store on Friday, another opportunity for those who want to try out the amazing game.

The game was rumored for getting Backward Compatibility support earlier this year. Moreover, the fans also requested for this game to get Backward Compatible for the Xbox One since Microsoft announced the feature back in November last year. Stay tuned for more updates! 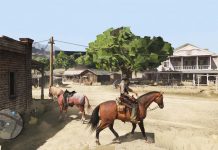