Ubisoft presents a new trailer for Tom Clancy’s Rainbow Six: Siege multiplayer mode, where reference is made to all the weaponry and gameplay variants of this anticipated game. The items will be 5 to 5, in situations where a team must defend the location and the other attack strategically, to defeat the terrorists. It will be released on October 12.

The newest CG trailer also reveals that the open beta will arrive in September, for all platforms.

The Rainbow Six Siege alpha will be in English, featuring the space of 8GB and minimum requirements is: 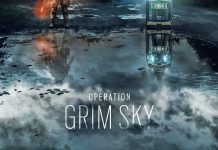