North America will wait for Persona 4 Dancing All Night but, in it will release on June 23.2015. Likewise, we can see lots of good looking screenshots which show off the investigation team, Nanako and the newcomer Kanami Mashita’s moves but, unfortunately it is seeming that Dojima is still unplayable.

A new characters are: Nanako, the lovable little sister from Persona 4, and Kanami, who has only mentioned in previous one for example, the anime adaptation. She is a part of Kanami’s Kitchen, who has played a very important part in Dancing All Night. 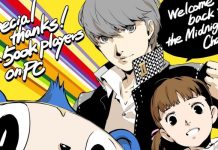 Persona 4 Golden has already sold more than 500,000 copies on PC