As reported, the company looking to manufacture for their first hand market i.e, Supercomputers and HPC and starts shipment in June 2016 in the U.S. while the OEM availability of Tesla P100 will begin in first quarter of 2017.

It seems that the first priority of NVIDIA is HPC and Supercomputer market due to the fact that yesterday during GTC presentation, company’s CEO briefly discussed NVIDIA DGX-1, which it describes as “World’s first Deep Learning Supercomputer“. But considering the market growth of the company, the main source of revenue is the gaming industry.

Pascal is new-gen GPU architecture after successful launch of Maxwell, one of the most power efficient at the moment. But according to the company, Pascal is 70% faster than the current Maxwell in Deep learning and will offer twice of the performance per watt as compared with Maxwell, working of 16nm FinFET and HBM2 memory. The Tesla P100 features 16 GB of HBM2 Memory, 4096-bit HBM2 Memory Bus, 3584 CUDA Cores, 224 Texture Units, 5.30 TFLOPs Compute and Base clock of 1328 MHz.

Here are the specs of Tesla P100 Specs, and comparison with Tesla series GPUs: 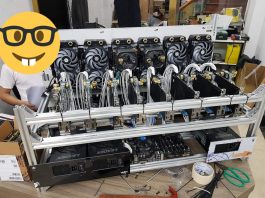