The NVIDIA GeForceGTX 1070 Ti is taking shape and although we do not have reliable data on its specifications, but according to various leaks, it will be launched in the month of October for a price of $ 429. 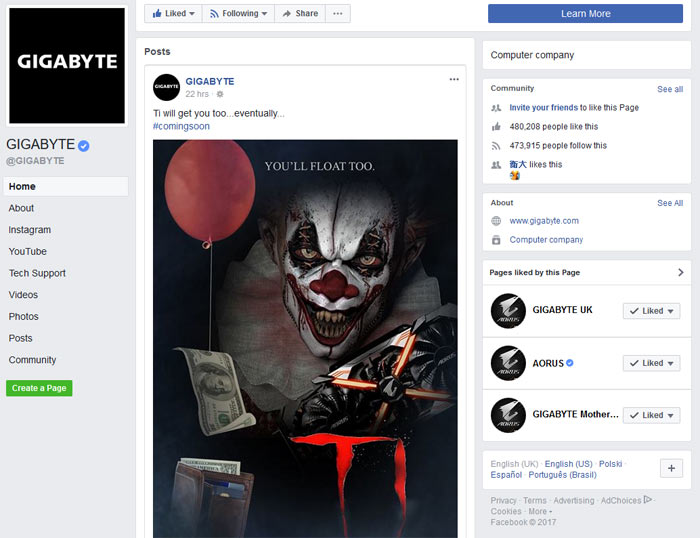 Few days back a foreign colleague over at the Chinese forum published a picture of gaming PC specification data sheet with GeForce GTX 1070 Ti. At that time, many thought that was some type of typographical error. Later it was Gigabyte, who in the official Facebook account, has confirmed a new graphics card, with an image where you see a terrifying clown and in caption they used “Ti” and also shown the picture of most powerful Gigabyte graphics card from Auros family.

According to MyDrivers, NVIDIA GeForce GTX 1070 Ti would have 2432 CUDA Cores with GDDR5 memory, although we do not have any data that can confirm this information. Other sources indicate that this graphics card would arrive in the month of October with a price of $ 429, which would indicate a reduction in the prices of GTX 1060 and GTX 1070.

We remind you that after the launch of AMD Vega graphics cards, Jen-Hsun Huang (CEO of NVIDIA) said that there would be no re-creation of Pascal, because it is a perfect architecture. Now, under any circumstances the normal thing was to think about some improvement or the implementation of a graphics technology, but we are surprised with a new graphics card. Is it necessary to launch a graphics card of these characteristics, when in the first quarter of 2018, the new gaming graphics card based on Volta will be presented?