Today, Nikon at CES 2015 announced a new generation of entry-level SLR Nikon D5500 (Yes, they skip D5400), D5500 is equipped with Touch Screen Flip, Nikon’s first touch screen flip SLR camera. It is made of the same material which has been previously used in D750, the same carbon fiber composites make it light, re-design makes the body thinner than D5300.

Nikon D5500 uses about 24.16 megapixel DX format CMOS sensor with EXPEED 4 processor 39-point AF system, the sensitivity ISO100-25600, up to about 5/second continuous shooting, support Full HD video recording 1920×1080/60FPS. The screen of D5500 is significantly changed with respect to the D5300 and D5500 approximately 1.037 million painting point of TFT LCD 3.2-inch touch screen with support to turn left about 180°, and can rotate clockwise in the open state 90°, counter-clockwise 180°, to facilitate the completion of the self-timer.

In addition, the Nikon D5500 also has WiFi capabilities, you can control the camera via a Wireless Mobile Utility application directly on smart devices. 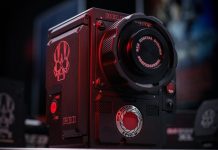