TaleWorlds Entertainment showcased a new gameplay video of Mount & Blade II: Bannerlord Capitan Mode, which puts players in charge of their own troop detachment in multiplayer battles of up to 5 vs. 5, and in this video we can see the Khuzait against the Empire.

Mount & Blade II: Bannerlord has been in development since the launch of Warband in 2010 and will have a completely new graphics engine created by TaleWorlds specifically for this game. This engine promises to open up new possibilities for the game and community of modders. TaleWorlds also said that they will continue with their tradition of support for mods.

Mount & Blade II: Bannerlord is exclusive to the PC platform, and has no release date, although it is speculated that it will be released before the end of this year. 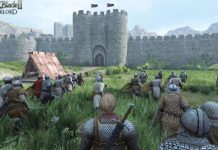