In mid-2019, it was revealed that the Liqid Element LQD4500, a spectacular SSD would take advantage of the PCI-Express 4.0 x16 interface, although the most impressive thing of all is that inside we ran into no less than 4x Phison PS5016-E16 controllers working in simultaneously thanks to custom firmware capable of handling up to 32TB of 3D TLC NAND Flash memory, resulting in sequential read and write speeds of up to 24,000 MB / s  (24 GB / s) read and write as well as up to 4 million read and write IOPS (sustained random writes are rated at 600K IOPS).

The Liqid Element LQD4500 arrives only in an FHFL format, and this is due to a generous aluminum heatsink that completely covers the PCB of the unit for cooling, all occupying a single PCI slot and generating a consumption of 65W, so it requires a 6-pin PCI-Express connector for power.

Now thanks to Linus Tech Tips we know that inside there are 8x M.2 ports where we can install the SSDs that we want until reaching the performance limit of 24 GB / s, which translates to being almost 3x times faster than the SSD from the PlayStation 5 (9 GB / s), which after all is the fastest SSD on the market, since on PC the fastest reaches 5 GB / s due to controller limitation.

In real applications, it was translated in playing a 4K video with a bitrate of 500 Mbps in a super fluid way, which is equivalent to playing a video that has 20x times higher quality of vision compared to 4K that is offered by Netflix streaming. Even with numerous simultaneous 4K videos, the SSD allowed perfect fluidity, moving data amount 250x times higher than that offered by Netflix 4K. Impressive numbers! 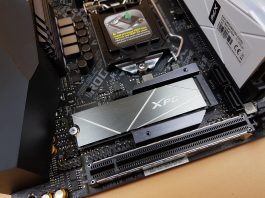 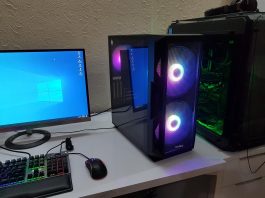