Intel has begun to make price adjustments on more than 20 CPUs of both 6th Generation Skylake and 7th Generation Kaby Lake family. As you can see below, a well-known American store, Microcenter has already been able to find the new prices for Intel CPUs, although in comparison with AMD Ryzen, the processors for the Intel LGA2011-3 socket are still at exorbitant prices, while the LGA1151 family offers prices that should have been those of its launch, so sorry, if you recently bought an Intel CPU, you should know that, for example, if you bought a Core i7-7700K, it is likely that the Next week, or the next, that same CPU is  around 60 or 80 euros cheaper.

Intel Lowered The Price Of Skylake and Kaby Lake CPUs 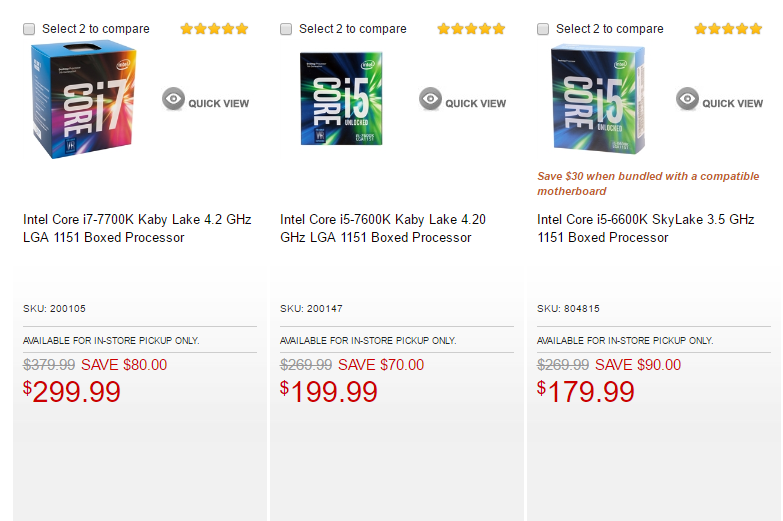 Now we’re going with Intel’s persuasive methods with its customers. Thanks to the PCGamesN’s user “pmurphy8811“, which indicates that he is the System Director and he has been contacted by Intel to renew its equipment’s with “special promotions” and “Incentive rebates”, but he was not well received when he indicated that he would wait for Naples. (AMD Naples CPUs focus on servers with up to 32 cores).

“It’s upsetting to have to say, but should be said. As an IT Director I have already been approached by an Intel representative to discuss the “special promotions” and “Incentive rebates” that they are willing to offer me for purchasing exclusively Intel powered servers. I was not well received when I explained that I would not be purchasing anything until I see the benchmarks of the new Ryzen (Naples) core and compare the cost-to-performance ratio. It was at that point they made it very clear that they would go to great lengths from a financial standpoint to incentive me to NOT purchase AMD chips.

These are the tactics that were used back in the day that AMD had feared would be used again. Intel offered “loyalty rebates” and other clever promotions to hide the fact that they were paying customers to lock out the competition. I sincerely hope that other IT Directors and all in IT in general do what’s best for the industry and choose based off of what’s best for the consumer and their environment. The rebates are nice and all, but if we continue to hurt AMD for a small rebate, we destroy the AMD’s ability to compete and enable Intel to continue their “Tick-Tock” releases and oppressive pricing.

Be aware folks, Intel is scared and is already looking to use their weight and $’s to NOT out innovate, but to obstruct the competitions ability to enter the marketplace. Why else would they be contacting and attempting to “Incentivize” customers well before the launch of AMD’s server chips in Q2-Q3?

Sorry for the rant, but these past few years from Intel have been terrible from a pricing and tech innovation standpoint. I would hate to see AMD get the shaft after building such a great product over the last 5 years with the help of Jim Keller and AMD architect Mike Clark. They did such a great job turning the CPU division around it should have the ability to be judged on its own merits and not locked out by Intel to prolong the CPU stagnation in the market.”

After this price drop due to competition, would you consider buying an Intel CPU?