Unfortunately, the graphics card is fed only through two PCI-Express connectors 8 + 6 pin that will limit Overclocking potential, so its giant cooling system will not be able to take advantage to the end, we are here talking about Herculez X4 Ultra so you have to expect more the Graphics card radiator is comprised of a dense aluminum radiator pierced by five copper heatpipes and supported by three 90 mm ​​fans with an aluminum backplate.

This model is now on sale in a few countries in Germany you can find it at a price of 750 euros. 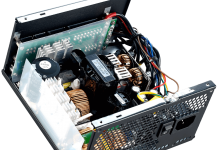