Home Miscellaneous How much Ridley Scott is involved in Halo: Nightfall?

Well, since we all know that Ridley Scott will be somehow involved in the upcoming Halo: Nightfall which is a five episode miniseries set in the Halo Universe. We already knew Ridley Scott is in this but, how much that is something we didn’t know.

“[Nightfall] is our director Sergio Mimica-Gezzan’s vision, but Ridley carries a big stake and gets input on things. I’m not going to pretend [Scott’s] footprints and fingerprints are all over it, but it’s a small organization with a lot of collaborative creatives.

“One of [Scott’s] ideas of where we could film it completely changed one aspect of the story which I won’t go into,” O’Connor concluded. “It sounds a bit weird, but he’s a huge fan of the environments in terms of how they help tell stories.

“His thoughts on where to film it to make it look alien – and he had a great experience with the last Alien movie in Iceland – actually affected the story quite dramatically.”

Well, he is not totally into this project, but still he is involved in it, his experience in the last Alien movie do affect the story.

Xbox users who will buy Halo: Master Chief edition will be able to get Halo: Nightfall with it later this year. 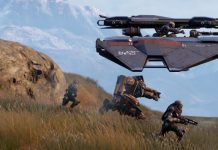