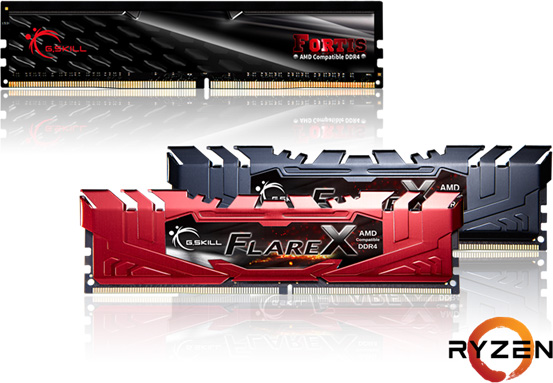 G.Skill has announced the launch of two new memory families: Flare X and FORTIS, both designed and created specifically for use with the new AMD Ryzen processors. These high-performance memory kits feature a validation that certifies their compatibility and stability, even under Overclocking conditions with new AMD hardware.

According to the company, the DDR4 Flare X memories are designed to bring back to life the legendary G.Skill Flare family, which offered the best performance possible in the previous generation of DDR3 memories. This means that each memory chip that makes up each stick has been specifically selected, tested and validated for the AM4 platform. The FORTIS G.Skill is designed for gamers, the best memory about quality, durability and compatibility at an attractive price.