After announcing the addition of the Rogue class and the Ninja job to Final Fantasy XIV yesterday at E3, Square Enix released a large batch of screenshots and artwork from the PS4 version of the game showcasing them in action.
We also got to see quite a lot of general screenshots (including a couple shots of the lovely Shiva), and a beautiful poster for patch 2.3.

The rogue and the ninja will be added with patch 2.4, which will presumably come within 3 months. We also got the official version of the dedicated cinematic trailer. 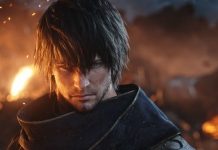