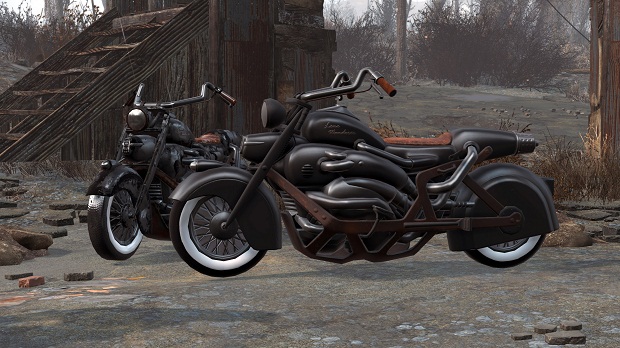 Bethesda’s popular role-playing action game Fallout 4 gets a new mod which allows the players to ride, repair and customize their motorbikes and explore the devastated streets of Boston.

Modder “Hunk92” has developed the Fallout 4 Driveable Motorcycle mod, allowing the character to explore the wasteland of the open-world title in customizable motorcycle and even take the Dog Meat for a ride.

Players will require Nexus Mod launcher in order to run the Driveable Motorcycle Mod as it is a Nexus exclusive mod. However, there are some issues with the mod’s experience, specifically with the camera. According to the reports, players’ head gets disappeared while getting off the bike and it re-appears after getting on and off the bike again. But the mod is pretty amazing and has some quality bike sound effects.

For those who can’t load the mod from the Nexus Mod launcher, simply drag the mod files in the game’s folder and open the ‘fallout4.ini’ with notepad to add the following lines;

The motorbike will be shown in your map in order to help you find your ride. The mod includes a holotape for the players to make some changes and crafting options such as riding speed, putting on the lights and even painting. While you can customize the bike and install a cart for the Dog Meat to go on exploring the open-world with him.

The Fallout 4 Driveable Motorcyle mod is available for download from here.