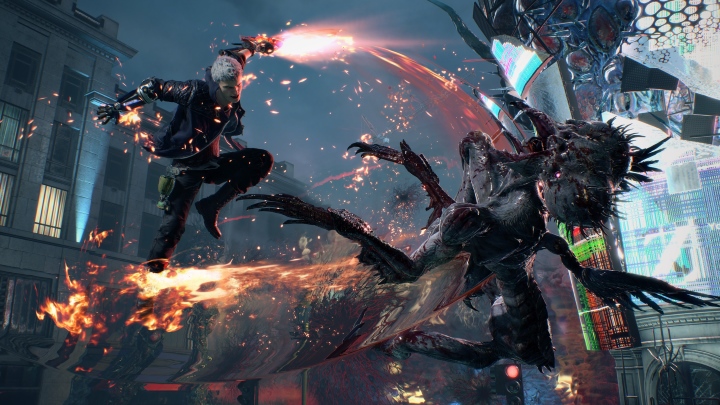 IGN released a new video showing about 15 minutes gameplay of the latest iteration of the Devil May Cry franchise recorded on Xbox One X.

In the gameplay video you can see the protagonist Nero smashing some demons and facing the formidable boss with his iconic sword “Red Queen” and stir “Blue Rose”. In addition, Nero uses his new mechanical arm that seems to work a lot like the “Devil Bringer” of DMC 4.

Now, 10 years after the last entry with Devil May Cry 4, Hideaki Itsuno and the core team have met to conclude the long saga of the Sons of Sparda.

Several years have passed in Devil May Cry 5 and the threat of demonic power, long since forgotten, has returned to threaten the world once again. The demonic invasion begins with the seeds of a “demon tree” taking root in Red Grave City. The infernal raid attracts the attention of the young demon-hunter Nero, an ally of Dante who is now without his demonic arm, the source of his great power. With Nero leaving for Red Grave City in his mobile home called “Devil May Cry”, with his partner Nico, he understands how everything started. The loss of his demonic arm, the demonic invasion, and the disappearance of Dante. Things must be accommodated once and for all.

Devil May Cry 5 uses the most modern version of the RE Engine, offering visuals of the highest level, as you can see in the trailer above recorded on Xbox One X.