Corsair has released its Hydro HG10 Series for sale, which is the updated Hydro GPU cooler for NVIDIA’s next Generation Graphics cards. An upgraded version of H110, apart from it in order to entertain Graphics cards.

The Corsair Hydro Series HG10 is made ​​up of an aluminum piece that is positioned on the PCB with direct contact with the VRM and memory of the graphics (for cooling), and leaving the hole prepared for connecting the liquid block above the GPU fan while the other end of the chart is positioned to evacuate waste heat from the components. This radiator support Corsair Link technology, its regulation and monitoring on the PC side, even LOGO LED light color can also be replaced by your choice. 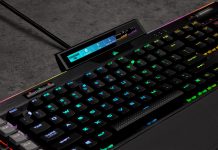 Asus refreshes its AMD B450 motherboards lineup with the tagline “II”

Sajjad Hussain - 21/10/2020 0
Asus announced its new "refresh" motherboards, all of them with the tagline II and equipped with the AMD B450 chipset, and the reason is...