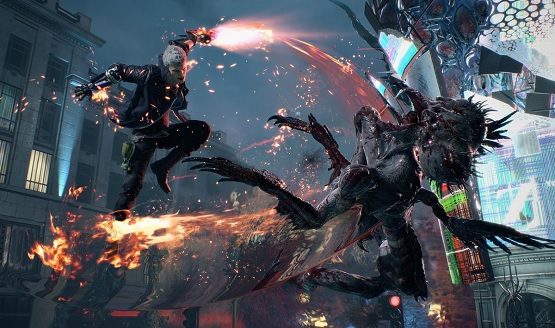 Capcom is all ready to present its upcoming titles at the Tokyo Game Show (TGS) 2018 event which is scheduled as a four-day event between September 20th, and September 23rd. According to the studio, some major titles including the Devil May Cry 5 and Resident Evil 2 Remake will be playable during the event.

The TGS 2018 will be hosted at Makuhari Messe, Chiba where major game developers and publishers will be showing off their upcoming titles and earlier today, Capcom announced the list of all the games which will be playable during the upcoming event. As per the announcement, Resident Evil 2, Devil May Cry 5, Mega Man 11, and Street Fighter 30th Anniversary Collection.

Devil May Cry 5 is set after the events of Devil May Cry 2 and previously, Capcom confirmed that the game will focus on narrative storyline and the gameplay settings will be similar to the previous installments in the DMC franchise. Moreover, we are going to enjoy the famous horror-survival game Resident Evil 2 Remake once again with visually enhanced graphics.

Apart from these gameplay demo, a Monster Hunter World tournament will also take place during the event. Last time, it went live in July this year where hundreds participated in the tournament and the winners ware promised a trophy, gifts and trip to Japan with tournament opportunity at TGS 2018.

The studio also planned Resident Evil 2 shooting range in collaboration with Marui which will take place in booth in hall 7 and lastly, a number of game’s merchandise will be available to the fans for purchase.

Devil May Cry 5 is scheduled for release on March 8th, 2019 while the Resident Evil 2 Remake is planned for release on January 25, 2019 for PC, PS4 and Xbox One. Stay tuned for more updates!