Home Miscellaneous BitTorrent will have its own series and TV shows

The company BitTorrent today announced a partnership with Rapid Eye Studios. Its result will be a series of TV shows which will be exclusively available for users running some time ago BitTorrent Bundle service. BitTorrent Originals will be made ​​available to a wider audience after one or two months.

BitTorrent will have its own series and TV shows

The BitTorrent Bundle service was launched in May 2013 and its main task was to offer favorable conditions for artists (which you can read in one of last year’s news). Since that time, they went through a strong expansion and now boasts a database of 10,000 publishers and 2 million legal titles purchased by over 170 million users a month.

“Other publishers of original content, such as Amazon Prime, Netflix or Hulu, passed a huge progress, but we start with a big advantage. We have a larger audience than all of these platforms together, “ – said Matt Mason, director. content on BitTorrent. Executive Director, Eric Kliknkier added – “the entrance to the original content industry is a step that makes us a major player in the media industry. Brings us closer to our goal: to create a stable, digital future, which will benefit all kinds of creators “ .

Most of the original BitTorrent content will be maintained in a television style. They first announced the show, namely Children of the Machine – science fiction, whose photographs will commence in the spring. The first season will consist of eight 60-minute episodes. The premiere is scheduled for the fourth quarter of this year.

Serial Children of the Machine will be seen for free advertising or premium version for 9.95 dollars. Users interested in this second option can count on the absence of any advertising, soundtrack and additional materials, such as shots from behind the scenes. According to the creators of the show will be able to boast of an audience at the level of 60-80 million viewers.

For now, BitTorrent works exclusively with Rapid Eye Studios. With time, attach to successive partners, resulting in a rash of exclusive content. Encourage owners of factories great potential in financial terms – 90 percent. What do you think about this project, any chance of success? 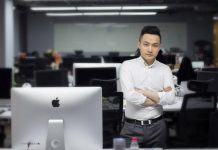 The founder of Tron cryptocurrency buys BitTorrent for 140 million dollars