The new expansion pack, Battlefield 4 Dragon’s Teeth is just few hours away from the launch. EA has uploaded a release trailer to increase the curiosity of the players.

Premium subscribers of Battlefield 4 will have access to this DLC this Tuesday, whereas the regular members can expect the DLC on July 29, two weeks later.

Battlefield 4 Dragon’s Teeth introduces four large multiplayer maps which are set in the continent of Asia, a ground vehicle which is heavily armed and is remotely operated.

Furthermore, a two-handed ballistic shield which is used as mobile cover. The powerful shield has provision for using weaponry. It looks pretty cool too.

Fresh weapons will also be introduced along with a new gamemode called Chain Link which challenges the players for battles and much more! 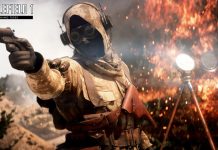