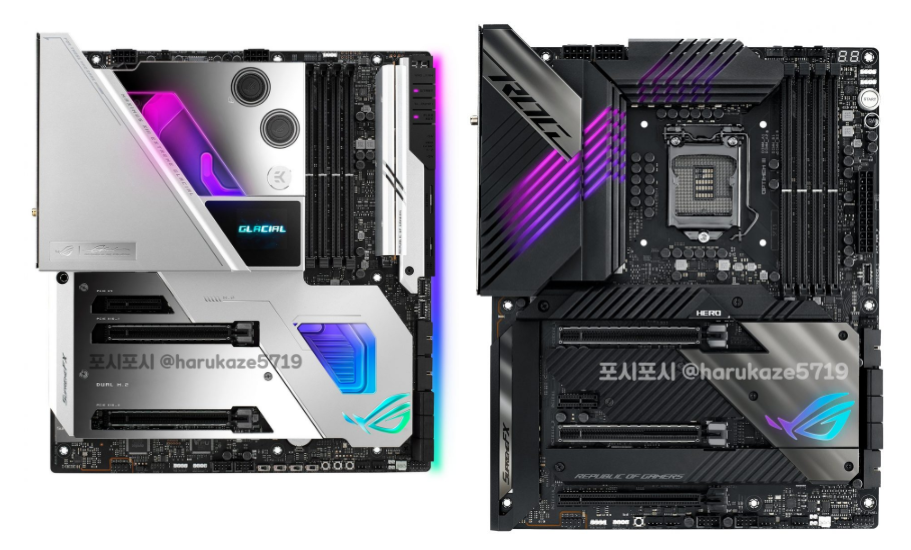 All of these motherboards still maintain the LGA1200 socket, but they have been designed with the new Intel Rocket Lake-S processors in mind, which are expected to be announced tomorrow at CES 2021 followed by launch expected in March-2021. The most palpable difference in the high-end models is two EPS 8 + 4-pin power connectors have been replaced by 2x 8 + 8-pins , making it clear that they want the system to have access to more power with overclocking and system stability in mind.

The Asus Maximus XIII Extreme Glacial is the top of the range motherboard. It already incorporates a block to cool CPU, VRM and chipset by water. The information is based on what we see from above picture, we will at least an M.2 port, 2x PCI-Express x16 + 1x PCIe x4 lanes, numerous switches to disable motherboard interfaces, and what looks like an OLED screen. The Asus Maximus XIII Hero uses generous aluminum heatsinks for the VRM, a third PCIe x16 interface is gained along with a PCIe x1, we have access to 3x M.2 ports, and integrated Power / Reset buttons.

The Asus Prime Z590-A and Asus TUF Z590-Plus WiFi are much more affordable motherboards, where in the first model we have RGB and the TUF variant lacks RGB lightning. Both are practically the same motherboard except for the differences between how the PCIe slots are distributed, so basically you will pay more for the visual aspect and lighting, and not for any performance improvement or higher dose of overclocking.