An event was held in Taiwan today, in which ASRock take a major part and unveiled their latest X99 motherboards, all those bad boys feature latest Intel X99 Chipset, Support Intel Haswell-E Processors and all new DDR4 Memory. Previously we have seen that ASRock revealed its two motherboards ASRock X99 WS and X99 Extreme 4, but now ASRock comes with a big exposure at the event, ASRock has made a top level entry after the announcement of ASRock X99 Extreme 11 Flagship Motherboard. It seems like ASRock is taking more interest in Intel new X99 Chipset.  ASRock X99 Extreme 11 motherboard will be available on sale from October.

In addition, if we talk about all ASRock X99 motherboards, own quality standards. Some Motherboards are built on a “Super Alloy” design.  ASRock X99 Extreme 11 is equipped with a large aluminum heat sink of XXL size, which will help in the reduction of heat. The other great feature is “Ultra Dual-N MOSFET” , high output chokes of 60A “premium 60A Power Choke” boasts a 12,000 hour life, at 105c ambient temperature. According to Mr.Chris Lee all products are equipped with great features, design, superior durability and reliability than ever before.

Before talking more about ASRock X99 Extreme 11, lets take a look at other motherboards from ASRock X99 Series.

Overeclocking is the second love for most of the players, for making this love more good ASRock also comes with X99 OC Formula Series. Many players love to do LN2 Cooling for this purpose Waterproofing is already applied on the surface. The size is also M-ATX. Still, we don’t know the price of this product.

Now again comes to the main topic, we already see, that is equipped with some good features, but there is another thing which will become the candy of many eyes , this thing is 18 SATA3.0 (6Gbps) ports, 10 of which are powered through the PCH and the renaming 8 through a separate SAS controller. ASRock X99 Extreme 11 allows multi-graphics also corresponding to the NVIDIA SLI / AMD CrossFireX up to 4-Way. 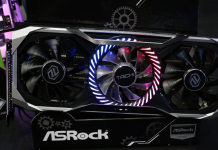