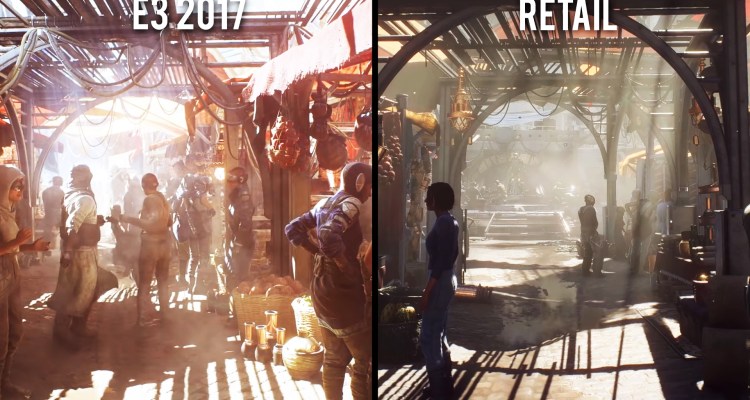 For many it was really evident that Anthem would not launch on the PC platform in the way we saw it during E3 of 2017, when it was announced by surprise at the EA event. Others kept hope high until the last moment and the game finally launch for the PC.

After Anthem officially launch on the PC platform, gameplay videos soon arrived comparing the E3 gameplay with a gameplay capture of the same mission in the final game, and there are definitely too changes in the final build of the game. Youtube user Nick930 took the time to analyze the scenes of that demo step by step, and to put them next to the current title, where not only can you see an important lack of vegetation, but also other dynamic events such as presence of animals, the effect of realistic physics, and important changes in the global lighting system and volumetric lights.

Given the current performance of the final version of Anthem, it is not surprising that this game has been trimmed in such a way that it works fairly well on current teams. Fort Tarsis, for example, has undergone radical changes even in the amount of NPCs present in its different sectors, and many of them do not even have animations of the caliber seen in the first demo. The reflections of light in the water, the volumetric fog, and the effects of thick smoke in the explosions also disappeared.

What draws the most attention of all this is that the trailer opened with texts that indicated that it was a captured in real time, the pre-alpha version, and in 4K resolution, which may prove that EA has taken advantage of some device that protects it from possible claims for misleading advertising. Maybe that version of Anthem itself is really functional, but it requires much more than the equipment we currently have to work with.

Also, do not forget that Anthem, regardless of how good or bad it may be – or the downgrade it has suffered – is one of the games with the best visual resources in the history of the PC platform.