Vertical sync is still present means for preventing the occurrence of rapid movement of the game screen tearing and now have we have also a lot to discuss about the G-Sync and FreeSync most of the G-Sync products are in the wild but for FreeSync monitors we have to wait. Also one more thing is the price as the cost of implementing G-Sync in your monitor or buying a monitor with G-sync will cost you little higher. Well, there is no other can be used directly on the technology? Sometime ago NVIDIA has launched Adaptive V-Sync and AMD will also launch their DFRC dynamic frame rate control technology, is there is something special in it?

About technique called Dynamic Frame Rate Control, a member of AMD’s PR Chris Hook said that, this technology will be added to the new version of the Catalyst driver, the constant frame rate can be limited to 60FPS, while also reducing power and the effect is still “very very excited” (mind blowing).

Currently we have the details of the DFRC which is not yet completely understood, according to our guesses, this technology and vertical sync or adaptive vertical both are not same, DFRC will pass the initiative to reduce the frequency of the graphics card, the voltage to do the actual rendering of graphics output frame rate lock to around 60FPS, In order to reduce power consumption, heat and noise will also be resolved.

TechPowerUp, also added that in some of the higher requirements of occasions, this technology will be properly Overclocked to allow smoother frame rate curves. In addition, this technology will introduce in the latest version of the AMD catalyst driver and it is also expected to support more graphics and can be used directly in the consoles.

As for the actual results, such as AMD officially launched when they re-test it. 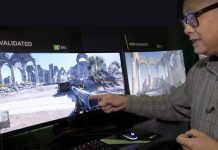