The well-known professional Overclocker ” Der8auer ” managed to overclock the AMD Ryzen 5 1600X 6-core @5905.64 MHz (5.90 GHz), being the biggest milestone of all this was done without deactivating any core. Obviously, this feat was achieved using liquid nitrogen and was possible with a base-clock of 129.79 MHz along with a multiplier of 45.5x. 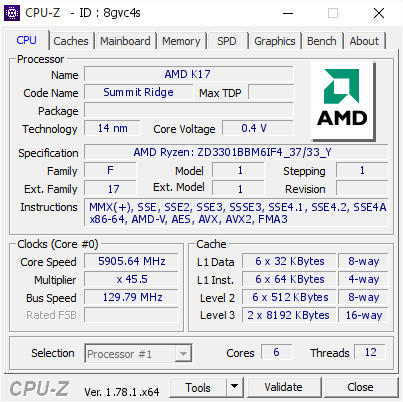 The AMD Ryzen 5 1600X processor was coupled with Asus Crosshair VI Hero motherboard along with a G.Skill Trident Z memory kit. Der8auer ran several popular benchmark programs to see what an LN2 1600X was capable of. He recorded a top stable clock speed of 5.9064GHz with 6C/12T enabled, which dethrones the Intel Core i7 5820K from its No. 1 spot.

ABOUT US
Tech4Gamers is a definitive source for news and analysis on emerging technologies. Featuring honest and in-depth product reviews and a credible analysis on technological innovation, Tech4Gamers covers a wide range of technology trends – from small business to enterprise, social to mobile, gadgets, computing devices and the general World Wide Web.
Contact us: [email protected]amers.com
FOLLOW US
© 2020 Tech4Gamers. All rights reserved.