This year New Generation Consoles have been released such as Xbox One and PS4. So along that New Graphics Technologies and Engines are going to be developed too, which will enhance the gaming experience more than ever. Along consoles PCs will also continue to evolve with extreme performance games. In the list Shooting games are always on top. So we are presenting the 5 most anticipated shooter games of 2014 so you don’t miss any of them. Many of them will be appreciated by gamers, but the real candy will be decided at the END OF THE YEAR.

TitanFall is the First Person Shooter game of this year one the best thing is that the game is developed by the Respawn Entertainment studio. The concept of the game is you can say totally new unlike other First Person Shooter Games, this concept will drive Gamers to fight against the mech in the Open World Environment and other variables. The gameplay videos of this game are available on many websites, multiplayer seems good up 64 players can join the ground at once. The start of the campaign is with your Player (A Titan Pilot) is with the Jetpack on his back, this will help him to jump more bigger and also allow him to reach through his giant Titan, the player can also run on walls, for the Players who is still not bear the wait for March, the Beta of Titan Fall is now waiting for them to give a try.

Machine Games are again with the First-Person Shooter game, the release date of Wolfenstein The New Order is Q4 2013 but it’s delayed from the developers for some reasons. The Story of this game will take you to 1960 right after the Nazis won the bloody World War II, American war hero players play in Europe to regain control of the Earth’s super weapon from the hands of the Nazis Legion.

The Tom Clancy’s Rainbow Six: Patriots developed by Ubisoft, the game will allow the player to play the dynamic storyline of campaign and multiplayer. In game squad faces an attempt to throw the U.S government’s terrorist threat called “Patriot” will bring. Playing at the Rainbow you will face a dynamic critical situation and scenery that will need to stop the breed of the terrorists. To stop the breed the coordination is really needed with other squad to overthrow the situation with colors.

The game will continue to tell the story of the protagonist Karl Fairburne in World War II, the new players to go to Africa for the theater against the Nazis. The game is still open sandbox environment, and to retain the X-ray play.

Destiny is a First Person Shooter game from the creators Halo and Marathon and the publisher of Call of Duty Activision. The story of the game seems totally new with new concept of gameplay filled with the Universe incredible adventure. You are playing as the Guardian of the Last Save city on earth, defend the city with incredible power and reclaim what we lost. 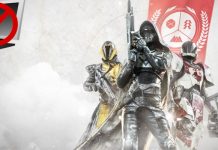